Party Neighbor is back, complete with screaming people by his pool. At least this year the bass is not shaking my house. I think last year’s party which sounded like a club was happening in my house until 3am got him a lot of visits from pissed neighbors, including me.

I noticed this too.

The dew point is 75 which google tells me is “tropical”. Michigan is not supposed to be tropical. I went outside for the shortest possible time to feed and water the birds and came in dripping with sweat. Yuck.

Party Neighbor is back

OMG miracle, either a bunch of neighbors got the message through (one is a lawyer) or maybe the police got involved last year (I was on hold for hours until 2am during the “club in my house” and don’t know if they ever showed up because the police were understaffed). They kept the music at a reasonable volume the whole time; one song was louder and they immediately turned it down. And then they wrapped up the party by 11pm!!

The party still ran almost all day but every summer party last year had a bass that vibrated my skull and I couldn’t escape it inside my own house. The neighbors three doors down who are just above them had it worse because of their proximity and original windows and they actually sold their house this year, I think because they couldn’t take it anymore.

Human attempted to get up to actually do some chores around the house. Complaints were logged 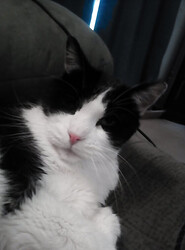 I washed my hair for the first time in…an embarrassingly long time. And it looks incredible and shiny and ringlet-y and the only place I’m going is to bed. Why is the hair always so nice when no one will see it!

Gonna be on my period for camping

Making a Drs appointment should not be this hard. Daughter’s well child visit was a few weeks late last year because she got sick and we had to reschedule. Apparently some insurances only allow one per 365 days. So if you’re late once you just have to be that late… forever? I guess? So I’m on hold forever because the scheduler is contacting my insurance to see if they’re per calendar year or per 365 days.

How fucking dumb. These are anchored to their birthday. This is the dumbest shit ever. What a waste of everyone’s time.

More than 20 min on hold now. SirB gave up on trying to keep the toddler away from the office and took her outside somewhere. I still have another appointment call to make after this. THIS IS WHY MY EXECUTIVE FUNCTION IS SO BAD. Maybe I’d get over dreading this shit if I wasn’t right that its AWFUL EVERY TIME. Ahem.

ETA Okay done. And the strict 365 only applies to adults for certain things, and she’s new to peds. Ah well. DONE. Now to call the second and (LOL) expected to be worse one. Thank you all for being my moral support.

Second call and I quote “This is the slowest this system has ever been. I don’t know what’s going on”. My lucky day today.

No idea, it annoys me too. Kiddo’s well visit is in the fall at this point, he has a summer birthday.

I ordered some enzyme cleaner right when this happened, it took until now to arrive, and they sent the wrong product. It’s just a standard stain remover spray. (I definitely ordered the pet enzyme cleaner, I double checked the receipt.)

Now I have to return this spray AND go to the store to get what I actually wanted because I’m tired of the litter mat smelling like poop. I should have just done that a week ago.

I jumped too much dancing, and now my knee is complaining, but I still have the wiggles

The only reason that this is a tiny complaint and not a huge one is that I have some discard that I might be able to revive as well as a frozen backup.

7? bites clustered all on one shoulder.

Noooooo Bunhilde! So this is going to show my utter lack of understanding of sourdoughs, but can you just chop off a piece that’s really far away from the moldy spot and use that to start a new one?

visible mold is just part of the equation.