Sort of along the same lines…

For years, I’ve planned to do 2 parties: Cinco de Mayo. I know what I’d serve for that. The other is a bread/soup party.

I have some favorites… I do a good corn/cheese chowder, a potato soup and cream of onion soups. Problem is they’re all veggie based and creamy, our preference.

What kind of breads would you serve? Soups? I’m thinking 5 kinds of each…

I would do 5 flavoura of chips to represent my soul instead of bread:
Reduced salt ruffles
Cheesies
Flaming hot cheesies
Tortilla
Sour cream and onion
Caramel corn

Not all chips? Neither is my souk 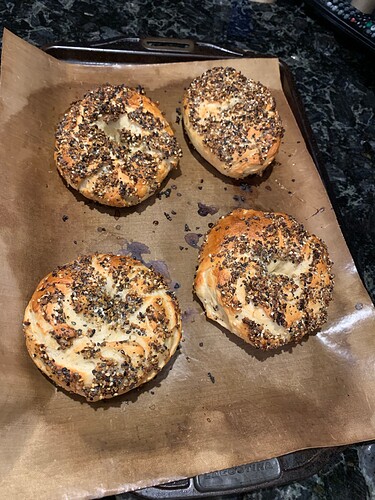 They look great! How do they taste?

They are good! The seasoning has too much salt for my preference, so next time I will lighten up on it.

But I’m quite pleased for my first attempt.

I also like carrot/thyme soup. It’s a puréed soup.

Do you have a recipe for this? It sounds amazing! I love pureed soups with a good crusty bread.

Savory vegetarian pumpkin recipes that are not chili?
Pumpkin chili is delicious but my freezer is full of various chilis already.

curry? pizza (very good with goat cheese/feta if you are so inclined)? pasta sauce (chunky or puree)? salad (lettuce or couscous) with pomegranate seeds or walnuts?

cornbread? (I haven’t done this one, but it sprang to mind)

Mac n cheese! Makes for a nice sauce add in. I googled and there are tons of recipes!

I also have a pumpkin bisque soup I made recently, I’ll try to remember to find the recipe tomorrow on a real computer.

Hm, curry could be tasty. Or pasta sauce. Should mention I’m looking for stuff that freezes well. Either of those probably would.

I used to do a lot of pasta sauce with about 50% pumpkin puree: tomato ratio. Up the spices a bit, but it’s good and hearty.

Pumpkin bisque recipe from a friend:

Cook till all the vegetables are soft, puree."

I also came across this alfredo sauce recipe link but I don’t think I’ve tried it yet. Not sure how the alfredo would freeze though.

Pumpkin sausage soup would totally work with vegetarian sausages too I bet.

I came in here to brainstorm ideas for roasted butternut squash (roughly 10 cups chopped), and then I realized people had just finished giving ideas for pumpkin, which is basically the same thing.

The second soup is a bit risky because I don’t know if the shadowy one will like the seasoning, but also I have a lot of peppers right now. And I can’t decide if I’m willing to put in the effort to make the gnocchi since again, it isn’t really something the shadowy one cares about.

And for lunch I have some leftover orzo and feta from tonight’s dinner, so I’ll probably have a bowl with the butternut squash, some tahini dressing, maybe bell pepper, some walnuts.