What do you all think of the Gizmo smart watches?
I really don’t want my 5-year old attached to a device.
But also…when she is out playing with the scooter gang, it would be nice to have an idea of where she is. Sometimes they leave their scooters outside so if you look down the street you can tell what house they are at, but sometimes they are all at the garage, so it’s one of 5 places they could be…and I have no idea.

A few of her friends have them and it’s nice for them to just be able to call home and ask if they can stay for dinner or something. (I mean, of course I’d let them use my phone; but I’ve never had a kid ask to use my cell phone; no one has house phones.)

I’ve never heard of them but they sound great. My big Q would be around cyber security though.

If you want to research them, it’s a Verizon device. They have 10 phone numbers they can call, and they can send pre-written texts, and I think receive texts only from those 10 numbers.

It’s I believe $10 a month service, and the device cost varies depending on model. I think security on the locator would be about the same as any other mobile device.

I was just about to come here and ask the same question. I want a tracker on my kid and I’m not sure what to get. The recent gizmo reviews are awful, but the older ones are good. I wonder what’s going on with that? Did you buy one?

No, I didn’t get one. I decided to just stick with the 90s style of not really knowing where she is…

Haha! I mostly want one because the school bus has a huge variance in arrival times and I don’t want to be waiting out there a long time in the winter. Definitely a first world problem.

My niece had one a million years ago and one week they drove cross country and my husband as an account “owner” got messages every 5 minutes “R’s Gizmo has gone out of the service area” “R’s Gizmo has returned to the service area”- so if the verizon service is patchy in your area (and they still do that alert) it might be a giant pain for school bus tracking.

I’m trying to ascertain if I need to move L out of her crib. I really don’t want to. She is fully able to climb in and out, but right now she only climbs in. We have this tent thing on her bed so when she’s in the bed we zip up the tent and she can’t crawl out. But while playing L and B both climb into the bed and I’ve grabbed her before she tries to crawl out/falls, but I feel like it’s only a matter of time.

She’s only 21 months old. We pulled B out of the crib at like 19 months for the same reason (plus we needed it for L to sleep in) but I regret it and wish she had stayed in longer. At I being too risky keeping her in the crib? 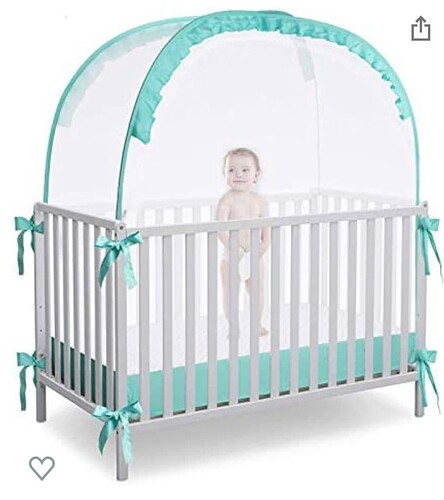 The mattress is in the tent and it seems very sturdy when it’s zipped up. I haven’t ever seen her try to climb out while it’s zipped up either. However, when it’s unzipped because they just climbed in to play around, it’s more dangerous because it’s slippery up against the crib rail.

Also, climbing in to play is a new thing over the past few weeks, which is what has gotten me worried. Yesterday afternoon the girls ran through the house chasing each other and laughing. Ry was cleaning up the kitchen and I was trying to finish up something for work, while sitting at the table. They ran back toward the bedrooms and a few minutes later I heard a lout thud and L started screaming. I immediately thought she had fallen while trying to climb in/out of the crib. It turns out she had fallen off the glider (still not good, but a good 2 feet lower).

We didn’t do a tent, the day Kiddo basically went “Hey mama watch this!” and climbed out we converted it to the toddler bed setting and baby-proofed the shit out of his room, including a cabinet latch on the closet doors for a while. We got a knob cover for his door to keep him contained (we always sleep with doors closed). Years later we traded out the knob cover for something called a Door Monkey which keeps the door mostly closed but could allow in a crack of light from the hallway if that’s more your style.

We pulled B out of the crib at like 19 months for the same reason (plus we needed it for L to sleep in) but I regret it and wish she had stayed in longer.

What do you regret about it?

What do you regret about it?

It’s just so nice to stick them in the crib and shut the door and know that they stay in the bed. With B we went from me laying her in the crib, saying goodnight, and her going to sleep on her own, to her insanely crying for 30 minutes and falling asleep when she cried herself out in front of the door. Then I read a whole bunch of stuff saying that ideally they should stay in the crib until 2.5 at a minimum because they aren’t emotionally ready to be without the security of the crib walls until then. I ended up putting the tent on her toddler bed at that point and then she went right back to just falling asleep on her own after I tucked her in. We kept on the tent for approximately 9 months until she threw up on it and there wasn’t any way to get it clean. Since then it is pretty much 50/50 between when she stays in bed to sleep or falls asleep crying in front of her door. Then I have to put her back in bed once she’s super asleep and hope she doesn’t wake up enough to actually be awake, because then there is no way for me to get to bed without her in my bed too (I mean, of course there is, but I’m not willing to give up sleep to make it happen).

I just don’t want to go through all of that again already. I swore that no matter what I would keep L in her crib as long as possible, but she’s honestly more of a climber than B was. I think it is time, but I don’t want it to be. At least this time we are going to transition with the tent on the toddler bed right away. Maybe we can do it this weekend when my in-laws are here to help.

Then I read a whole bunch of stuff saying that ideally they should stay in the crib until 2.5 at a minimum because they aren’t emotionally ready to be without the security of the crib walls until then.

No one told my kid that. He was STOKED to move to a big boy bed.

I think doing the tent on the toddler bed is a good move. Also if L really wants to go back to having a crib then you can say okay but absolutely no climbing because it isn’t safe.

Any smaller stop-gap you would be comfortable with climbing out of before you switch to a bed? My daughter climbed out of her crib once (and fell, sobbed, “bump head, bump head!” the works) at 25-26 months and I took it down that day. For a while she just used the pack and play for cozy and contained sleep. She never tried to climb out of that, but if she had I would have been fine with a tumble and maybe a learned lesson from that height.

That lasted about a month, and then the dreaded longer snuggle bedtimes started until she got her big girl twin bed. Now we have a much briefer bedtime snuggle and she goes into her bed when I tell her it’s time for me to go. That’s been the last month-ish of much easier bedtime.

It might be worth trying a tent in the same way again (for either or both kids) too.

I took time between meetings to talk to Ry. We are going to give B a twin size bed and then either give her toddler bed to L or just get a new toddler bed for L. We got B’s from buy nothing and it s a very well-used plastic one that I think used to have minnie mouse on it but is now just pink. While vacuuming last weekend I discovered the plastic bits on the bottom of 2 of the metal legs are missing and it has been scratching the hell out of her wood floor. I put a rug under it to prevent further damage but it looks weird like that. We should probably just buy another one. They had them at once upon a child the last time I stopped in. This weekend B is going to be getting a lot of attention and a lot of new things because of her birthday, so switching over L’s room will be a nice little thing just for her.

We changed Duckling’s cot to toddler bed configuration at ~20 months, because he tried to climb out and i want willing to risk it. We had no problems.

Pumpkin may be getting hers changed sooner because shes still waking at night and I am physically hurting myself to put her in it (short people problems) even though she hasnt tried to climb out.

Can you leave it zipped up when shes not in it to prevent play?

Can you leave it zipped up when shes not in it to prevent play?

Although that may have some risks too. At this point we’ve decided to just take the plunge this week.

I’m trying to figure out what is going on with B. Yesterday she started saying that her stomach feels sick. No vomit or diarrhea. She also keeps saying that her mouth hurts and she is drooling like CRAZY. Like, hair and shirt soaked with the constant drool coming out of her mouth. She got her 2nd molars a year ago so she definitely isn’t teething and shouldn’t get anymore teeth until these ones start falling out. I have checked out her teeth and I can’t see anything amiss. I even used a floss stick to floss along the gum lines on each individual tooth and kept asking if it made it hurt more and she said no (we floss every night anyway - this was just to check for tenderness).

Since the girls never went to daycare, and we have been locked down due to covid, neither of my girls has ever really been sick. B and I both got the flu when she was 2 months old, and then both girls got a bug when we traveled 1.5 years ago, but that’s it. I bet she got a virus from preschool last week. I’m going to give her a covid test, and thankfully she has her 3yo checkup this afternoon anyway so we can see what the doctor says.