Unf*ck Your Brain: memes and more

A home for validation, exploration, and sharing of weird things we recognize our brains doing.

Anyway the real “wtf brain?” moment here is I keep trying to rationalize how I’m OK, but after yesterday’s incident I recognize I’m not entirely and also that it’s OK and I’m a human and I come with feelings.

Then I went to research if I want to use Kaiser MH benefits or Better Help and had ALL kinds of login issues so that was greeeat. kicks things I have to call them today to get unlocked/reset.

ETA: open to advice but may not read books. 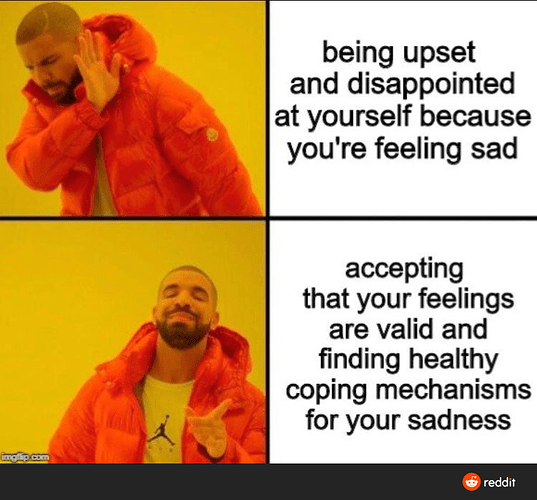 Can we also add “if you do not want suggestions, please specify”? Either that or “default to support only, but add it you’re open to suggestions”. I feel like support versus solving can get gnarly sometimes, but especially when it’s brain stuff.

And, following. Are used to get a lot of benefit from working through translating my physical signs into emotions by discussing with my husband. I’m pretty bad at directly identifying what’s going on with me, and he’s kind of my anger translator if you get what I mean. But ever since (finally… and the “big I diagnosis” is one I’m facing down again now, frack) having a child, there’s less time for that. And it’s really affected my internal balance I think.

I only made it halfway through the body keeps the score. And it was absolutely illuminating, but also just a lot.

Me: gives advice to mom friends to wear in ear headphone during whiny times of the day to avoid getting triggered
Also me: doesn’t fucking do that and gets triggered. Possibly misguided guilt? (Like dissociating and not replying to her bids ever is better?? Also I have zero judgement for when other people and see it as a GOOD parenting move so why do I judge MYSELF for it?) 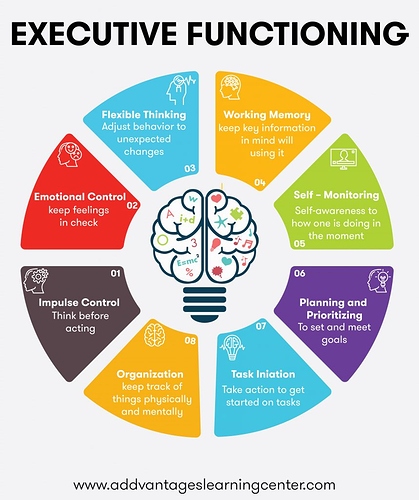 image859×1024 104 KB
Especially the planning/prioritizing and task completion stuff. (Memory isn’t good either but I’m working around that okay)

Also, anyone else have seasonal depression that strikes in the SPRING? It’s never made sense to me but has been a pattern as long as I can remember for myself. Like paradoxical SAD or something.

My top 3 tips, not sure if they are good:

I don’t get SADD-like in spring, but I do get mad wanderlust, but school and work have always been more hectic and stressful (maybe bc fewer holidays?) so I put spend it mad frustrated I can’t hike/travel/etc.

Me: Advises everyone to get at least one 4 hour stretch of sleep every night. Gives several ideas on how to achieve it.
Also me: “Nah I’m too tired I’ll just skip all my sleep prep and fall asleep”. Has no more than 2.5 hour stretches.

… Guess who is finally following her own advice tonight…

Using habitica for dailies and todos and using a planner for setting weekly goals and intentions works for me!

How do people deal with sticky memories of deeply embarrassing events that don’t ever fucking go away and cause enormous distress?

For me, that’s always a symptom, not the Thing Itself. So when it’s bad I know I need to address what’s underlying it, and I just try to avoid a shame spiral about it.

I read other people’s mild and not so mild embarrassing stories (Twitter, AskReddit) to drive home to myself how common this is. Sometimes it’s even the same thing I did. Everyone has a deeply embarrassing experience. Then I ask, how have I grown since then that I would not do this embarrassing thing again? Speaking out loud to myself if necessary.

To help your therapy, I was once convinced to share a horribly racist joke told to me by my (foreign) cousin. I was already resistant to it, so I knew it was not something that needed retold. But both due to subsequent mortification, and greater understanding of systemic racism in the last 5 years, I would absolutely not do this again.

When I have things like that pop up I don’t let myself open up to allow the FEELINGS about it to fully reenact themselves - usually I’ll literally talk to myself like I’m talking to someone else, and instead of starting to go down the path of feeling and thinking about the incident I’ll interrupt myself and say something like “Oh hey it’s cool, I know that was really painful back then but everyone has moved on and it’s not a big deal anymore and hey you’re also really awesome today”

or something like that. But even more rambling and non-linear

I know for my brain, it works better to stop the emotions from un-useful memories being expressed fully, because once I allow that it’s much harder not to tell myself stories (i.e. think about or “remember” which is literally telling yourself new stories because of how memories work) about the situation and RE-coding that memory as an even more un-useful one.

If I already feel the feelings I do the same thing, but it usually takes a lot more self talk to get myself out of it.

I sing “do do do doooo” like an embarrassed cartoon character until the moment passes. Not sure why it works, but it seems to help it go faster?

Not sure about long term other than accepting I’m a human who is learning and at least I won’t make that same mistake again.


Does not contain advice about sex, but the blog itself does contain many reviews of sex toys, and orgasms are good for keeping your brain happy.
6 Likes
galliver May 6, 2021, 5:29pm #17

Me 5 min after sending email: Why hasn’t anyone responded yet!?

Me: my allergies and anxiety are linked. Allergens are high enough my whole face has been reacting for over a week. Discuss this with my husband a couple times in the last week.

I know we have discussed this at length previously and elsewhere, but I just continue to be amazed how my brain can be extremely “mehhhh” and dragging its proverbial feet on a task and working on the task makes me want to puke… And then once I get into it the flow state kicks in and it’s great.

Like can I please get this focus minus the guilt and stress of doing it last minute? What the eff, brain.

So I finished the task.

We got Healthy Fish Delivery ™ and then instead of napping at 8:45pm, I did 2 types of yoga for an hour combined and then did the dishes with slightly shaky knees. Why do I post this here? Because I currently feel Adulting Pride x3000, but I already know that tomorrow I will wake up quite resentful that I don’t get credit for the Things done today and that All The Things need done again…next pressing work project, workout, dinner. Rinse, repeat.

Reminded me of this internet classic. http://hyperboleandahalf.blogspot.com/2010/06/this-is-why-ill-never-be-adult.html?m=1