Not sure whether to ask this here or in the LGBTQ+ section, since it’s an LGBTQ+ issue but not a finance question.

I’m curious what people think about transgender women athletes. There is a fear among some of the conservative folks I know that transgender women will come to dominate women’s sports. I’m thinking here of people who are biologically male and aren’t doing any sort of hormone therapy for reassignment, etc. I realize intersex people present their own very interesting bioethics cases.

This is a link my SIL recently posted: 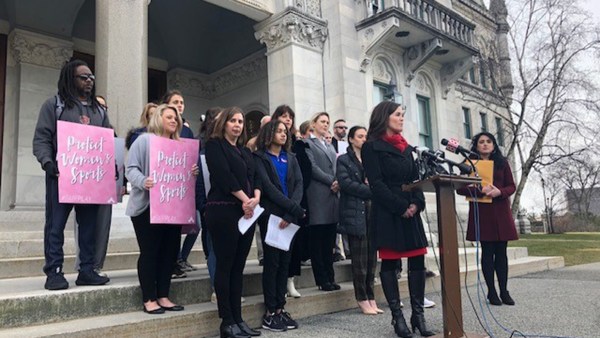 I’ll note in this specific case that there’s no specific details about the transgender athletes. Just curious what y’all think since I’m still very new to accepting transgender folks in general.

I’m not going to read the article as they tend to be toxic and triggering. I can already tell by the brief window in the forum that it’s likely to be that way as right off the bat it’s using female/male terminology.

Until society as a whole stops being toxic and violent towards transgender, genderqueer, gender non-conforming, non-binary folks as a whole, this will always be an issue.

This is an issue even with co-ed sports.

People should be able to play and perform the sports they want, and not be under attack for their identity to do so. Better rules and regulations, restructuring of groupings and scorings, are necessary for this to happen.

There will always be one or two individuals who fuck it up for everyone else. We need to focus on the whole, not the exceptions. Fearmongering (look at bathroom bills in various states for a good example) places more people at risk than the issue that’s being discussed ever does.

One of the best takes I’ve seen recently that I think should be acceptable to almost anyone (but alas probably isn’t) is that if your primary concern is supporting women in sports, there’s a LOT of positive work that needs to be done before we even start policing transgender participation. Fund women and girls’ athletics, represent them equally to men in media coverage, pay them equally, support athletes as they become parents, address doping. Do all that and you’ll do far more to make women and girls’ sports fair than you will attacking marginalized people who want to participate in sport.

(Answer afaict: It’s only considered unfair if you just don’t think transwomen are women, and you think they’re just trying to compete in an easier field instead of being who they genuinely are. The people pursuing this lawsuit clearly don’t, given the language they use. This is gross as all hell.)

And no matter what, I still would put a transwoman’s humanity and dignity - her desire and ability to live as the gender she is - first. That just plain matters more, full stop, than qualms about the fairness of athletic competition.

ETA: Rabbitarian, some of this may come across as strident/judgy - I have very strong feelings around this. I’m not trans, but as I was pretty gender non confirming as a kid, and have plenty of trans/nb friends now. To me, this stuff really is about basic human dignity, so I have to control my words pretty hard at times. If I haven’t, I apologize, because I respect the desire to learn and understand and I don’t ever want to stop someone from asking questions.

Yessssss. Pay the USWT more than the men and you’ll have gotten it right…

Yes. Imo this is absolutely the most important thing.

And no matter what, I still would put a transwoman’s humanity and dignity - her desire and ability to live as the gender she is - first. That just plain matters more, full stop, than qualms about the fairness of athletic competition.

Re the USWNT, yeah, equal pay can mean equal pay structures, equal offer of bonuses/victory incentives that the women, in this case, might be more likely to receive

anyway, it’s an awesome intersectional feminist sports podcast that I recently discovered and LOVE and have not been as successful as I’d hoped getting IRL friends obsessed with.

Honestly, given what the USWNT has done for soccer in this country, I think that team has deserved higher pay for a very long time.

But yes, I also think that they’re more likely to earn bonuses. :3

@Illathrael yeah really good points. As a very non traditional male I am increasingly coming around to a truly non-binary society as an ultimate goal to pursue.

@diapasoun a good point, though the argument here is that (as a population in general) biologically male individuals will generally outperform biologically female individuals, hence the desire to “protect” women’s sports. But I totally get what you’re saying about putting humanity and dignity ahead of fairness.

Worth noting here that I am a man with about as much athletic talent as a rock, and with a mild disability which further disadvantages me, so most female athletes would totally outclass me, lol.

If biological advantage is celebrated until it’s transwomen, then this is just discrimination, pure and simple.

Yeah, or even a perhaps more apt argument would be looking at how certain ethnicities often seem to have a dominance of a sport, like how Kenyans and Ethopians often dominate marathon running, etc. Good point.

This goes back to binary gender and especially “natural law” theory that ascribes an awful lot of power to that pesky Biblical phrase “male and female he created them” that intersex individuals prove wrong, and that I (and perhaps y’all) would argue that society should be as gender irrelevant as possible (I.e., people who don’t place emphasis on gender should be accepted, but also people who find a great deal of meaning in self-expression as a certain gender are also honored)…not sure how best to phrase that.

What Actually Happens When a Trans Athlete Transitions

Fears of trans women taking over women’s sports simply doesn’t match up with the reality of the effects that transitioning and hormone replacement therapy have on an athlete’s body.

This debate tires me, support women in sports, including trans women.

Thanks for sharing that. It was implied, however, in the piece I linked that these high school athletes hadn’t undergone a full transition yet. This article covers people who have done a full transition. So would you only be in favor of trans women who have fully transitioned over, or just anyone in any point of transition?

Not trying to debate, I’m asking out of genuine curiosity because I’m trying to think about how I feel about this. My previous reading about trans athletes had only really dealt with intersex, not women who had transitioned from being men.

My previous reading about trans athletes had only really intersex, not women who had transitioned from being men.

Yeah, my bad for being incorrect in my terms, I should have said something like “athletes that don’t fit into the gender binary system” like Caster Semanya.

So would you only be in favor of trans women who have fully transitioned over, or just anyone in any point of transition?

This right here is especially exhausting.

Regardless of where a man or woman is in their transition, a transman is a man, a transwoman is a woman.

Let people do the things they enjoy and quit harassing them because they don’t live their lives the way you think they should.

The “you” here is the general “you,” not you specifically, rabbitarian.

That’s making sense to me, especially when paired with @diapasoun’s point about biological advantage being celebrated except in this one case, and then the fact that many/most don’t even have an advantage.

Thanks for the responses

It was the thread here that @PAWG started many moons ago about gender that helped me finally grok transgender people rather than seeing it as a type of body dysphoria. But, as people who read my journal know, I’ve had a hard time shedding some of the harmful baggage from my very conservative upbringing, and some things once shed have actually snuck back in through my mental filters without me realizing it.

H and I have been talking about this recently a lot. He’s coming from the sports med/science side of it given his training and we’ve had some interesting conversations. I think it really also boils down to the big picture. This whole issue should absolutely not be used as yet another stick to beat a person with for being different, especially when applied at the school age levels when a person just wants to play a sport as themselves. Because that’s the bulk of where the harm will be done with an issue like this. A kid trying to play middle school level soccer should be allowed to do it, end of story and without a huge issue made of the person’s gender or status or anything. It shouldn’t turn into another way to single them out and make them different, especially given that the reason most people want their kids involved in sports are things like learning team work, learning how to set a goal and work toward it, athletic activity, being part of a community, etc. Those things don’t require any specific genitals to happen. But lasting harm does happen when it gets turned into a big ordeal and people are singled out yet again, and that’s where the dealbreaker is for me. At the end of the day winning at a sport is really immaterial, the lessons learned from participating are really the goal and we shouldn’t be excluding anyone from that.

And like others have said, there are a mountain of gender issues that need to be addressed in professional level sports, all the way from representation to equal pay structures and way beyond.