Share your board games here! What board games do you own? Which ones do you love? What good games are coming out soon? Pictures welcome, discussions of costs optional.

I love the game Dominion. I think it’s an interesting strategy type that I haven’t seen before. 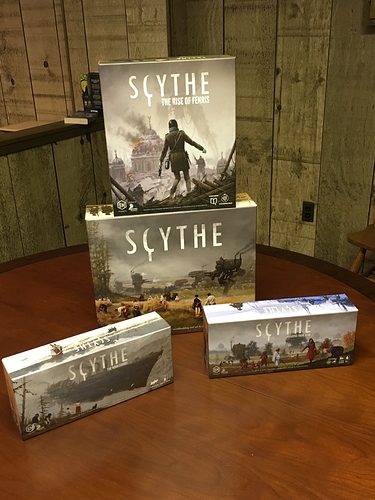 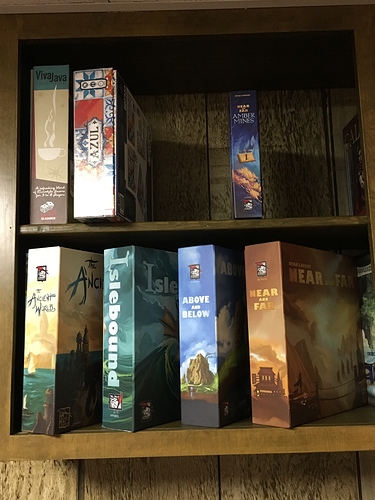 image3024×4032 1.86 MB
We have a lot of other games but I’m featuring Scythe and the expansions we have because it’s my husband’s favorite game and he wanted to make sure you all hear about it.

image3024×4032 1.86 MB
We also have several games from Red Raven. Above and Below has a special place in my heart because it was the first one we got. Near and Far has some similar mechanics but is more involved and has a legacy option.
3 Likes
neovonretorch October 2, 2019, 2:39am #5

Need more Scythe expansions! We only have the original. And we mostly play 2 player so that one doesn’t get a ton of play. I’ll have to post more on this very important thread, but not tonight.

@Kitti We love Dominion! We have a couple of the expansions too.

@Greyweld We also have Mysterium and haven’t played it in forever! We’ll need to make sure to play it sometime this month since it kind of fits with Halloween and all the cold rain we have coming up.

Scythe also doesn’t get a ton of play here. We got it somewhat recently and then bought a house, so that’s been sucking up a ton of our time lately. Plus a lot of our friends who would play Scythe with us work second shift and we both work daytime business hours.

Forgot to get an updated photo of our shelf, so here’s one from last March… 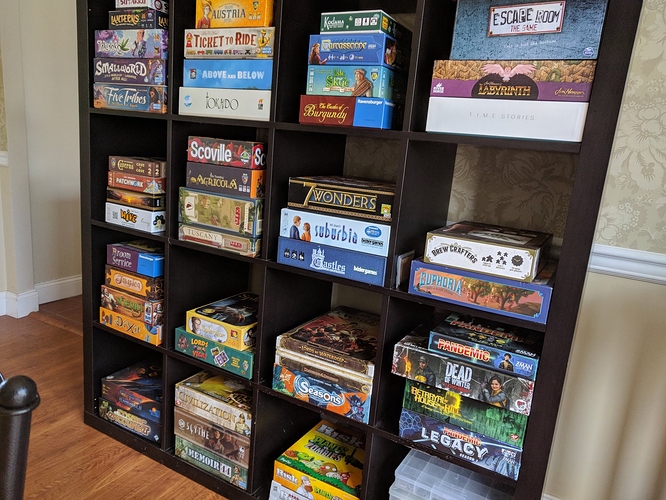 We’ve also started Pandemic Legacy with a neighbor couple! We’ve won January and February so far. (So that means 0 funding for March; no Event cards to help us!)

Pandemic is my long time favorite.

My two favorites over the summer were Planet (so simple and so fun) and Dice Forge.

omg Dice Forge is so cool! I too have played like 1000% less board games as a single person.

Oh yeah, I really like Dice Forge. For me, it’s a much more tactile game that’s comparable to Seasons but literally more hands-on. We have it, because, of course, we have “too many” games

If you can get a consistent group, I highly recommend Pandemic Legacy!

Oh, speaking of legacy games, we have a group that’s playing betrayal legacy. We only average about a session a month, due to some variable-schedule workers + my friend who is simultaneously working full time, going to grad school, and planning a wedding, but it’s QUITE fun.

And we mostly play 2 player so that one doesn’t get a ton of play.

My husband informs me that Scythe’s Automata deck (expansion?) makes the game better for two players. I think it also offers a solo mode? In case it’s not obvious my husband plays Scythe more than I do.

we have “too many” games

I don’t understand this concept?

That is to say, we don’t play every night or even every week. A lot of games get little to no play. We’ve obviously put some money into this hobby. But, we’re both kind of attached to having this variety of games at our disposal, even if our dozen most frequently played games would probably suffice.

I (we?) have some mental resistance to using Automata, though I’m not exactly sure where it comes from. For a while, we used the “third city” mechanic in 7 Wonders so we could play that even though it really requires 3+ players for normal play. And we liked that. But since Duel came out, we always choose that for 2 players. Can’t think of any other games off the top of my head where we include a “dummy” player. We might like it - who knows?! Neither of us have done any solo board games though.

Obviously you need games that are good for two players, with a variety of mechanics and themes and amount of effort and energy required to play, some competitive and some co-op. And then you need some for when your friends who are into games get together, and some for friends who aren’t really into games but are willing to give it a try anyway. It adds up!

(We’re not minimalists, at all. But our basement has a lot of built in shelf space and it isn’t 100% full. Yet.) 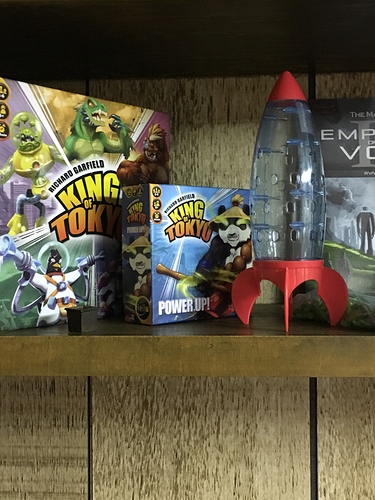 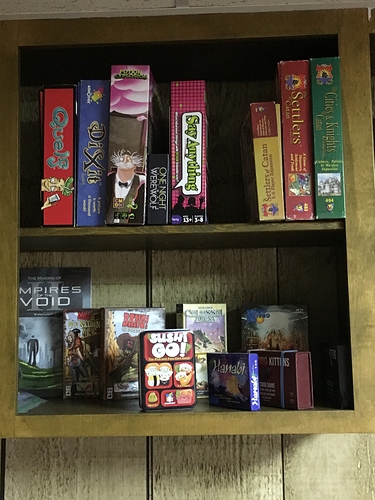 haha I literally have the same board game shelf as @neovonretorch, I think!