Oh no! I’m sorry the kiddo is struggling. My personal kids have done well in schools with a lot of ESL kids who are also on free lunch, things that drive down test scores, so it feels especially icky to me when people tell me that they chose a school based on test scores. But you’re right that there could be more to the story. Our schools have always had a lot of great teachers and programs.

My cousin was bullied by teachers and students at the public schools he went to buy this parents couldn’t afford/ didn’t believe in removing him and doing a private school, and homeschool is a really, really rare option here. If our local schools aren’t a good fit for our kids we’ll be likely homeschooling though because as far as i know every private school is religious and we are strongly against that.

I am contemplating creating a family email address and family phone number (just google voice or some shit).

1 & 4 allow easy swapping of information and tasks as big things come up.

Why is this a bad idea? Am I missing something?Is it just overcomplicated for no reason?

In my household, there is no chance that spouse would ever check the family email.

But, I like the idea of a family phone number if it would ring through to both cell phones at the same time?

we did this, about 15 or more years ago, when school emailing newsletters was new and there was only space on the form for one email address.

We still use it, it’s the email that the school uses, anything pertaining to the children, (scouts, cadets, etc), e-bills, etc. I think husband has it set up to forward to his own email automatically, I prefer to keep it separate but have it logged in on my phone, so I see any emails that come in that way.

Overall, this has been a great system for us.

Can the emails be auto-forwarded? The only downside is with gmail it only auto-forwards every hour unless you check it manually, but emails aren’t usually that time sensitive.

I haven’t heard of family phone numbers before. I did list Mr. Meer’s phone number first on school forms and he gets calls from the school before I do as the nurse/admin/whoever goes down the list.

I would be terrified the call forwarding on a family number would fall through for something major. I’m paranoid and technology hates me though. The more failure points the more failure for me, guaranteed.

I believe this used to be called a “landline”

I’ll see myself out…

Oooh yes. What if we had ONE CENTRAL LINE. But if we were busy, someone could just leave a message and we would check when we got back home. And whoever was nearby could answer it! Hmmmm

Now y’all sound like tech bros… what if we had a road that was JUST for automatic cars? And it made stops for lots of people?

What if we took all these individual subscription streaming services and cabled them together so could pay one price for all of them?

Help! I’m engaged in a power struggle with my 3 year old and I’m pretty sure I’m losing.

He’s on an inhaler that requires him to rinse out his mouth afterwards. He was doing a great job of drinking some water, swishing it around, and spitting it out for a few weeks after starting the inhaler. Then a few days ago he started messing around by first drinking the water down instead of spitting it out, and now just flat out refusing to put water in his mouth afterwards. He’s not upset by it, he just shakes his head and tells us that he doesn’t want to, or his mouth doesn’t work, etc.

Tonight I tried imposing consequences and told him that if he doesn’t rinse out his mouth we won’t do the parts of the bedtime routine that he likes (books, music, etc), and he stubbornly held out and went to bed rather than rinse out his mouth.

I mean, on the pro side I just gained 30 minutes at night, but he really needs to rinse out his mouth!

Honestly I would see if he’s interested in rinsing then spitting the water out an upstairs window or into a planter or something instead of a sink, if I was 3 I would think that’s fun lol

A nurse told us to do it before toothbrushing, and to hope for the best/give a drink of water itherwise.otherwise. Often I am just grateful he hasn’t gotten an oral infection yet

i have seriously pined for one but I am always moving! T_T

i do think i will give the google voice a try. at the very least it will save the daycare people from having to go thru two numbers to get a parent.

Have you tried silly? You forget how to spit. You have a mouth full of water then laugh and spray it into the sink. “Betcha can’t stay serious! No laughing! HEY I said no laughing!” Something so silly and fun he won’t be able to resist joining. You and a lovey can have fun sink spitting and if he joins so be it, you’re having so much fun you can’t even notice if he’s there.

We are probably still 4-6 months away from actually potty training, but Pipsqueak does like to sit on the toilet sometimes and I’m trying to encourage it without pushing.

I want to get something more easily accessible for the downstairs toilet that doesn’t take up any space (it’s a teeny tiny bathroom).

Any opinions on the built-in toilet seat (home Depot) vs the skiphop option (target) shown below?

Obviously one is more expensive but having a small condo means I’m willing to pay a bit extra for simple/space saving solutions as long as they work. 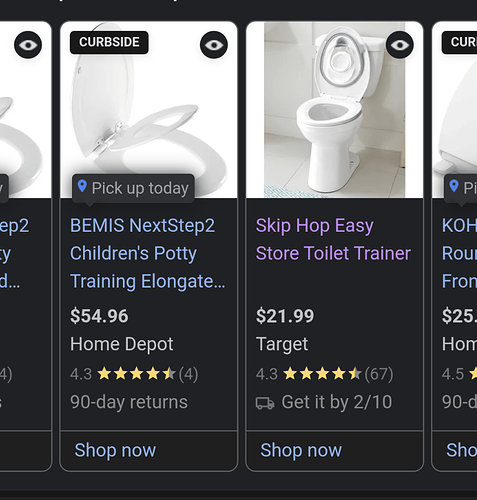 So my problem with the built in ones is Latte uh… very much pees forward. Having one with a very arched “splash guard” is a must for us. Until she insisted on one she could use totally on her own (necessitating a built in ladder thing for our stupidly tall toilet), the seat on a hook on the side of the tank worked well.

We have the built in toilet seat. We also have the “splash guard” issue with B and she peed over the seat and made a mess on almost every little potty we tried. However, the built in seat from Home Depot doesn’t have that problem, even though it doesn’t have a high splash guard. I think the reason is because it is situation so far back on the toilet that it forces her to sit with a different posture. We have not had a single issue with that since we got the built in seat.