@diapasoun had a brilliant idea: Send nice things in the mail!

I would also like to send and receive nice things while the mail still runs.

DM me your address, and I’ll send you a doodle!

Sending two of the following to anyone who DMs me an address: (a) a doodle, (b) a poem (written by an actual poet, not me), © a florid description of what my cat is doing at the time, or (d) a recipe written on a recipe card.

I’ve been thinking about snail mail and pen pals. I will send a cartoon (likely Far Side, Kliban, or Calvin & Hobbes).

ETA: Obviously - DM me an address

I’m late to this, but I would love to send you all flowers! (Not live ones, of course) Just let me know if you’d like a small bouquet to show up in your mailbox.

Not too late to DM me for drawings! First two going out today. 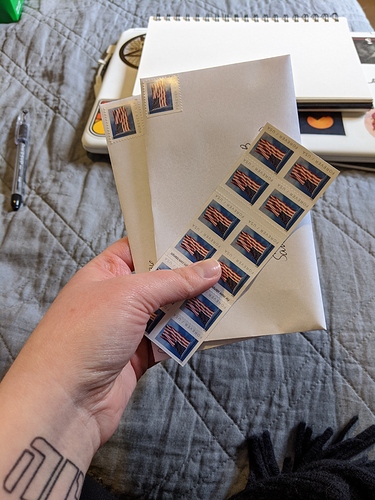 If anyone is interested in a 1000-piece puzzle of bottles of hot sauce, happy to send it along (US only please). DM with address…I’m not sure when it would get to you, but I have groceries to pick up for myself and the neighbors (who aren’t interested in puzzles) this afternoon and the post office is on the way. 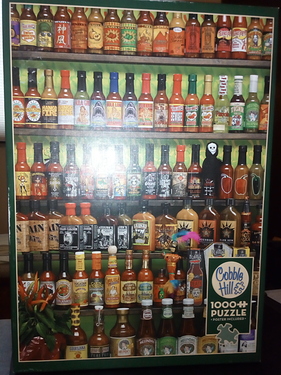 I’m terrible at puzzles, so I won’t take you up on your generous offer, but…I am delighted that this exists

Also, if anyone is interested in a cookbook, I’ve got two I’m happy to pass along: At Home with Madhur Jaffrey and Moosewood Restaurant Cooks at Home. The binding of the Moosewood book is a little worn, but both are clean inside (and haven’t been used recently), and I’ll disinfect the outside before mailing. Just DM me your address!
I really like both cookbooks- I’m just passing them on because I’ve scanned the recipes I use and prefer using those to the physical cookbooks.

Also DM me if you’d like to receive a super random bookmark! Perhaps even with a doodle on the back haha

this was one of my first cookbooks and at this point I probably just make the meals without thinking to go back to see what the recipe actually calls for. What are your favourites?

I risked the drug store today to send out 3 packages today, so I’m claiming membership in the club.

I love the Caribbean Black Beans and the Carrot and Feta Risotto! And the polenta, with or without broiled mushrooms. Probably others but I think those are the ones I repeat the most. What about you?

the most made things over the years are probably

And most commonly, I combined the shredded zucchini side with the sweet potato fritters from one of the other Moosewood books to make my regular fritters.

Going back to make this list, I’m interested to see that there are some things that I started making because other cookbooks intrigued me, and I hadn’t realized I already had those recipes here. And it would be great if we could find some decent Napa cabbage as some fresh vegetable while we’re going to the grocery store less often.

I don’t have anything to send, but I would write letters to someone!

I just found this thread!!

I imagine one can order more stamps online instead of going to a store right? I keep forgetting when I’m at the grocery store.

Yep. You absolutely can.

Also, I am reminded I owe some folks some letters from here.

SAME. I have a drawing just waiting for embellishment and words, but uh…I should get on that.

Also I don’t know if I ever said it, but your letter came ages ago and it’s SO CUTE I love the drawings, especially of Poe