It’s the OMD Cooking Club! We’ll pick a country, cuisine, or region every month and share our experiences! And if you need suggestions for dishes, feel free to request it in the thread and someone (or many someones) will find and present suggestions for you! The cooking club is super casual, no pressure way to try new things, test out products, share our cooking experiences, and, as pertains to budgeting, helps build skills to facilitate cooking in rather than eating out to save money and time.

Since the idea for this topic came from @diapasoun, let’s make the topic for November to be Thailand! Feel free to post requests or say what you are planning on making. And remember the goal is to have fun and try and learn new things!

Paging @AllHat, @diapasoun, @Kitti, @Frecks, @JRA64 and anyone else who wants to participate!

(@AllHat: I just wanted to get the thread started, and didn’t want to put it all on you, so if we want to change the format later we can.

I’ve dabbled a little in Thai-ish cooking. Red paste plus coconut milk makes for a super easy and tasty stir fry addition. Also Thai basil chicken (also have substituted lentils for the chicken) was a good dish when I had piles of fresh basil this summer.

I picked up a Thai cookbook from a free pile a few months ago and haven’t used it a ton; my goal this month will be to flip through and bookmark what looks good and try at least a few new recipes.

Can I join? I’m not much of a cook, but some impetus to get out of my comfort zone would be an excellent thing

OK this is the only Thai recipe I’ve made. I usually use tofu instead of eggs. Last time I used almonds instead of cashews. For me things seem to take longer to cook than the times listed.

Thai-style sweet and spicy pineapple fried rice with scrambled eggs and cashews. This is a healthy and quick weeknight dinner! So much better than take-out.

(I hope this isn’t just limited to original recipes.)

I picked up a Thai cookbook from a free pile a few months ago and haven’t used it a ton; my goal this month will be to flip through and bookmark what looks good and try at least a few new recipes.

Sweet! I think I need to find some new ideas as well, because as much as I like curry there is more to life than curry.

Can I join? I’m not much of a cook, but some impetus to get out of my comfort zone would be an excellent thing

(I hope this isn’t just limited to original recipes.)

Nope, we can share whatever we want! I hate how pineapple fried rice always has cashews in restaurants, I should just make it myself…

Thai curry is one of our staple dishes.

-Put the cooked, chopped up meat or chopped up tofu and raw veg in chicken or veggie broth, set to simmer
-Add curry paste at the same time. Spice loving adults like one tablespoon per eventual cup of liquid, kids and non-spice lovers like less.
-Simmer it all until the veg is cooked perfectly
-At the same time, make rice.
-Add a can of coconut milk or two, depending on how much you made, and serve over rice.

Your house will smell amazing.

PTF. Not sure how much I’ll contribute this month as I am mostly cooking for me and DD, and she isn’t a huge fan of Thai. But definitely wanting to diversify my range of recipes and enjoy sharing cooking stuff with likeminded folks, of which there are many here…

Probably will just end up lurking, but this reminds me of many moons ago when we were in a weekly rotating dinner night with my parents and one of their friends (who’ve known me so long they’re one of those non-biological aunt/uncles) and for about a year we did a different theme a month just like this

Not terribly authentic, our favorite homemade thai dishes include fresh/summer rolls, pad thai, and basil chicken. Pad thai was more effort than I really cared for to make, but basil chicken (or turkey and tofu…) was sooo easy!

I’ve had some sweet sticky rice in my pantry forever because I love sticky rice and wanted to make it…But you have to soak it and I never remember!

I’d like to find a Thai cookbook but for now I’m using a blog. I’m going to make Tom Yum Goong for my first Thai dish this month. I love this soup but have never made it at home! I’ll go to the store tomorrow to get anything I don’t have already in the pantry.

I’m a fundamentally lazy cook, so my go-to is usually a variation on this (more often in the instant pot than a crock, with various curry pastes as a base, with a wide variety of veggies depending on what I have, including frozen bags of veggies.

This Crockpot Thai Chicken Curry is healthy, tasty, & only takes one dish & five minutes to put together! 3 hours of cook time & you've got one yummy meal!

Thank you for posting this! I actually had some leftover pineapple tidbits from a stir fry this week but couldn’t figure out how to use it up this week, then one of my planned meals is missing a vital component (we already had it but then Mr. Meer mistakenly used it up in making lunch Sunday). I don’t have cashews but I’m not a big fan of them anyway, I might substitute some slivered almonds we have in the freezer. Everything else we have! Yay!

So glad you started this @CalBal! I’m in

sorry for ghosting, I had a rough patch, but I’m back and hungry for Thai food!

All right. Tom kha will be my first goal for the month. We’re travelling tonight through Monday, so unlikely that I’ll be in charge of cooking, but I can make it next week when we’re back.

Now I have to find a good recipe. And also galangal.

I had to make some substitutions after two days of trying to find some ingredients. And I had to adjust the recipe because I am an idiot. Despite the fact that it doesn’t really look like Tom Yum, it does taste good and scratches an itch! Also, the recipe is quite easy! Maybe 15 minutes total? It is very easy.

So first off, I didn’t even think about the fact that when you buy frozen shrimp in bags it never ever has the head attached. This recipe has you make the broth base with the shrimp heads, but since I didn’t have any I used the shells and then once I strained it I added one packet of hon dashi instant dashi. Hon dashi is made from bonito, not shrimp, but it is what I had on hand, and I think it did an ok job. I used 4g (which was the amount to use when making 2.5 cups miso soup, and this recipe used 4 cups of water).

I could not find straw mushrooms anywhere. I ended up using brown beech mushrooms instead because they are nice and petite.

I also goofed and thought I had roasted chili paste at home when in fact I had fresh chili paste. This likely contributed to the fact that the broth is not really that nice red, but whatevs.

And finally, I used one datil pepper instead of 3 Thai chilis. Datil peppers are approximately 3x as spicy (scoville units) as Thai chilis (in general) and I have a million datil that I grew this year, and when you buy Thai chilis at the Asian supermarket they come in packs of like… 50. I do not need that many additional hot chilis when I already have a ton of hot chilis. So datils it is.

I used my own home-grown lemongrass.

The results! The broth is a bit fishy (in a good way), and lime-y and lemongrass-y and very spicy. The cilantro is nice and the shrimp cooked up perfectly! It might not be exactly correct Tom Yum, but it was very tasty, would eat any day.

Oh, and I also noticed you actually can buy Tom Yum instant broth base when I was trolling the market. I wonder how it compares? Maybe next time i will get some to try out…

Maesri makes a canned Tom Yum that’s not bad, though I think their Tom Kha is better.

Oooo, I so love your dedication @CalBal that soup looks lovely, I bet it smelled sooooo good. Also you are the coolest for having home grown lemongrass.

I won’t be doing any Thai cooking until next week but I’m planning on starting with pad prik king. Still looking at recipes

I went to the Asian supermarket again and bought a bunch of new things. I spent quite a lot, actually, but I think it’s important to remember that it is far, far cheaper to cook this food than go out! So I present tonight’s dinner:

Before you get grossed out, it is not really like a custard. It is very much like a mousseline, which is fancy French type of dish that often contains fish, and is like a light mousse. It tastes exactly like you would imagine something made primarily of coconut milk/coconut cream, red curry paste, Thai basil, and Kaffir lime leaves would taste. There is egg in the mousse, which gives it its lightness. In addition, because the dish is steamed, the fish turns out beautifully moist. The mousse is light and delicious. It really is quite good, and did not take very long to cook. 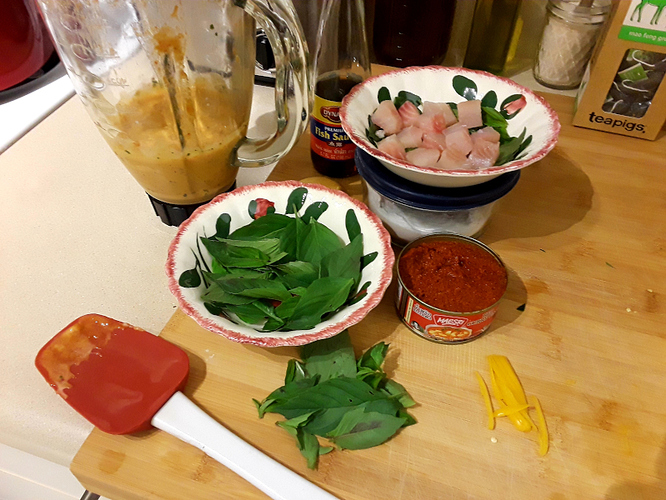 Ready to steam (the steamer basket went on top of a pot of boiling water, not directly on the burner, no worries!): 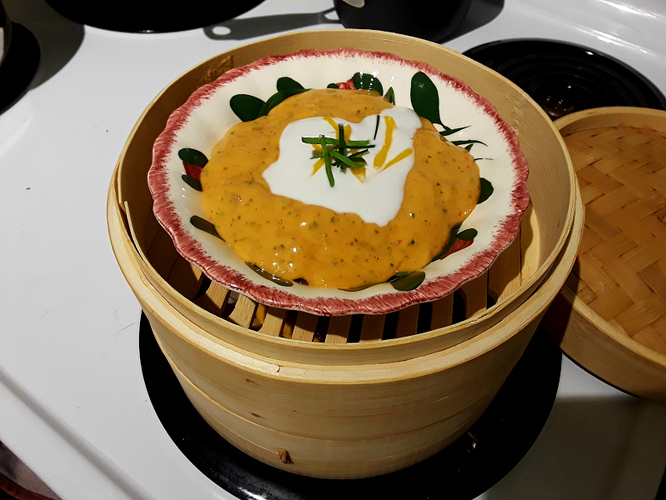 Out of the steamer, with jasmine rice and mao feng green tea (which is not Thai but whatevs): 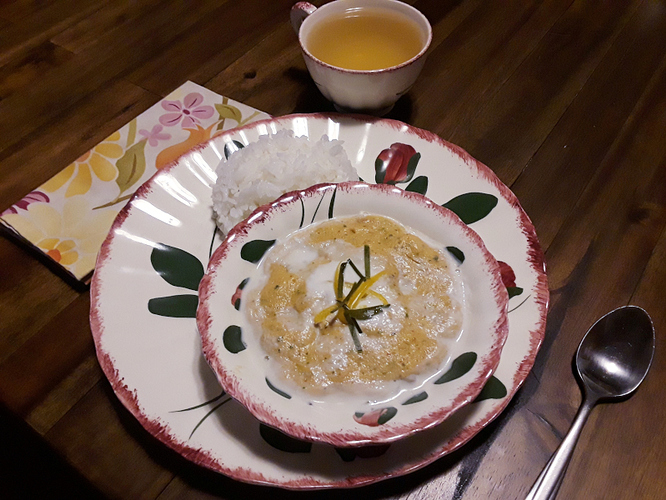 Will definitely make again. If anyone else makes this please report how it went!

That looks amazing! I am very impressed.