Hey folks, I’m stuck on one of these slate answers because I’m a notoriously shit gift giver and I thought I would source some ideas from y’all. Any thoughts?

My husband and I are both around 40, no kids, and a combined household income around $130k. We have savings, retirement accounts, and no debt beyond a mortgage and his small, nearly paid-off student loan.

We also have somewhat different spending habits. Our finances are combined; I track our accounts, make sure the bills get paid, transfer money to savings and do most of the talking with our financial guy. I have a good sense of what we can afford and while I do my best to make smart decisions and don’t impulse buy, I also don’t fuss much about spending money. My husband frequently agonizes over small or medium-sized purchases and I have to give him “permission” to buy a new PS5 or souvenirs on vacation.

This came to a head over Christmas gifts recently. He has a budget (that he came up with, not me) for his family, me, and the two good friends we exchange gifts with. He tracks things carefully; I try to focus on what kind of gifts a person wants or could use, and just not go overboard. He usually handles those gifts, but this year he said he could use a little help. To me, that was reason to research a little and buy a nice household item I knew our one friend could use. But he was appalled by me spending his entire budgeted amount ($100) on one gift, and on a kitchen item at that because it’s not “fun.” He insisted I cancel the order.

I am frustrated because what is the point if we can’t be generous sometimes? And how do we even talk about this when we have such different approaches to gift-giving?

—Is He the Grinch or Do I Go Overboard?

My personal leaning is somewhere in the middle - I typically wouldn’t spend $100 on one gift, but $100 seems pretty small for that many people (unclear how many are in his family, but I would assume at least 2? So at least 6 people total).

I’m also wondering what the gift-giving culture is amongst their friends. I for one would be pretty uncomfortable getting a super-expensive gift from a friend (as opposed to family) and then either feel I need to reciprocate or just feel bad that I couldn’t find anything “good enough” to give to the other person.

Set up time to discuss gift giving approaches and values (maybe after this particular holiday season). How does it fit into your family values? Is it distinct from how your family thinks about other charitable giving or part of it? How does you view it vs spending on on necessities and gifts for yourself?

Then, I would suggest having a family budget (or his and hers budgets) for gifts with a goal of “spend it all”.

As a long time married lady and epic gift giver I would say:

This is not a money or gifting issue at all. This is a communication breakdown

So in my opinion all of that is the actual problem. But for more money advice:

Before the holidays we sit down and make a gift budget for each other. We each spend the same amount on one another for Christmas. For our family gifts we spend about the same on each person each year, and I remind husband of what those amounts are and ask if he’s ok with that again. I do the shopping so sometimes there is an additional conversation.

So communication at decision points, basically. How much you spend is more a question of culture and class IMO so it’s kind of beside the point. All that matters is that they are on the same page.

I don’t think it’s a matter of generosity or frugality being wrong - there’s just not a sense of firmly and mutually decided on boundaries around money with regards gifts but also not a full sense of trusting the gift chooser and purchaser in matters of what, to whom, and how much.

What seems to be in common is desire to have generosity in the gift - the husband wants a gift of that value to be fun, so his preferences over the type of gift show he has some care about it giving joy through the gift. The wife has different opinions on it being generous - it being a utility kitchen tool doesn’t make it not generous. It’s unclear to me whether she necessarily associates higher value with higher generosity. But they can put the focus on that common ground.

It sounded like husband decided budget without looping in wife at all - not cool unless he was ok with bearing the full task of picking gifts within that overall budget.

Wife when asked for help either disregarded the known budget or didn’t care enough to ask what was left in it or wasn’t told there was a budget until after the gift was bought - either uncool or fine, depending on the sequence of events.

It’s also not clear to me if the letter-writer was asked for help and took more control than was desired, or if it’s an instance of asking for help in the sense that when I ask my husband to help me with the litter boxes I mean please clean the damn litter boxes, not let’s clean the litter boxes together. If he did expect her to help by picking, purchasing, etc the whole gift, he has no business complaining about the price because it’s not fun. But if he wanted help with finding something and she picked something without asking her, then he probably feels disappointed he didn’t get to be involved AND it’s more expensive than he wanted AND it’s something he didn’t pick.

Basically he feels like she violated his boundaries in terms of money and maybe didn’t give him a choice in the gift itself, in which case also violating his autonomy. She feels like he didn’t give her autonomy by not giving her input or flexibility on the gift budget, and violated the presumed autonomy he implicitly gave her when asking her to help with gifts by shitting on not just the amount she chose to spend but what exactly she chose to buy.

My conflict resolution steps would be the following:

2 - Budgety/avoiding the issue in the future.

If we want to put this in an emotionally more neutral and non-gift territory that may help you reframe a bit to a different context, let’s say my husband and I are discussing dinner. Maybe he usually plans, budgets for and makes dinner all the time, and on some occasion gets overwhelmed and asks me to take over making dinner for Saturday night.

Naturally I’ll probably make something I like. I freaking love Thai food so maybe I get takeout Thai food and it’s like $50 because everything is expensive. I get home with the Thai food and he’s kind of upset because he wouldn’t have spent that much money, and if he had spent that much he might have gotten like some filet mignon and shrimp or something.

Now I know in this situation kind of nebulously that he has a food budget that he has been meticulous in tracking. I probably don’t know those numbers at all times. I probably know that he occasionally spends more or less per meal, depending, but it tends to even out. But he didn’t give me guidelines on how much to spend, or what kind of a dinner to make, so all I have is that there is a budget exists, it was some size, and I can maybe figure out an average cost per meal based on that.

I feel hurt with him being upset because he asked me to do something, I picked something I thought was great and generally within reason for what I know about the budget, and even though it’s fine for him he didn’t love it. That’s not fair. But if I knew that our budget for meals is $500 a month, I might be out of line spending 10% of that on a single meal, even if it wasn’t exactly communicated to me how much I could spend on Saturday night dinner.

One thing upon re-reading is that it seems he did allocate $100, the amount she spent, for this gift.

So if he asked her to help by picking out a gift and gave her a budget and she followed that and he then didn’t like it? He’s the AH.

If he wants her to spend less than he should tell her the budget is less.

I think he allocated $100 for all the gifts, and she spent the entire budget on the one gift he asked her to choose? Not fully sure but that’s what I’d assumed.

Hm okay the wording is unclear to me. If she spent the entire per person allocated budget on one gift that’s one thing, if she spent the whole gift budget entirely on one person that’s a lot without communication. But also $100 for gifts from a couple, to two sets of parents and two friends seems super frugal, but that entirely depends on personal circumstances.

I think the whole thing here that rubs me the wrong way on husband’s end is that he complained that it wasn’t a “fun” gift. How rude to ask your spouse to handle buying a gift and then being upset it’s not fun enough. That’s what makes me think this is the allocated budget for one person - I think if she had spent the whole Christmas budget entirely on one person the type of gift wouldn’t even have come up.

You’re right it is unclear! I think it shows that their communication is unclear. I’m so curious about what the gift was too.

I think in any circumstance, they basically just need to agree on a gift budget together, what is allocated per person together, and agree on who is picking what and then not complain about the other person’s choices within the budgetary boundaries.

I don’t do xmas and still felt like $100 for 6+ people was a very frugal budget.

I got two gift questions this week. Thank you all for your help! You interpreted it roughly the same as me, but since I am really bad at giving gifts I wanted to crosscheck

Dont have time to closely read the whole thread but thats a ridiculous or impossible budget? A pound of butter is $3.50 so you can barely gift homemade cookies on that budget.

Hey thanks all, the answer is out! 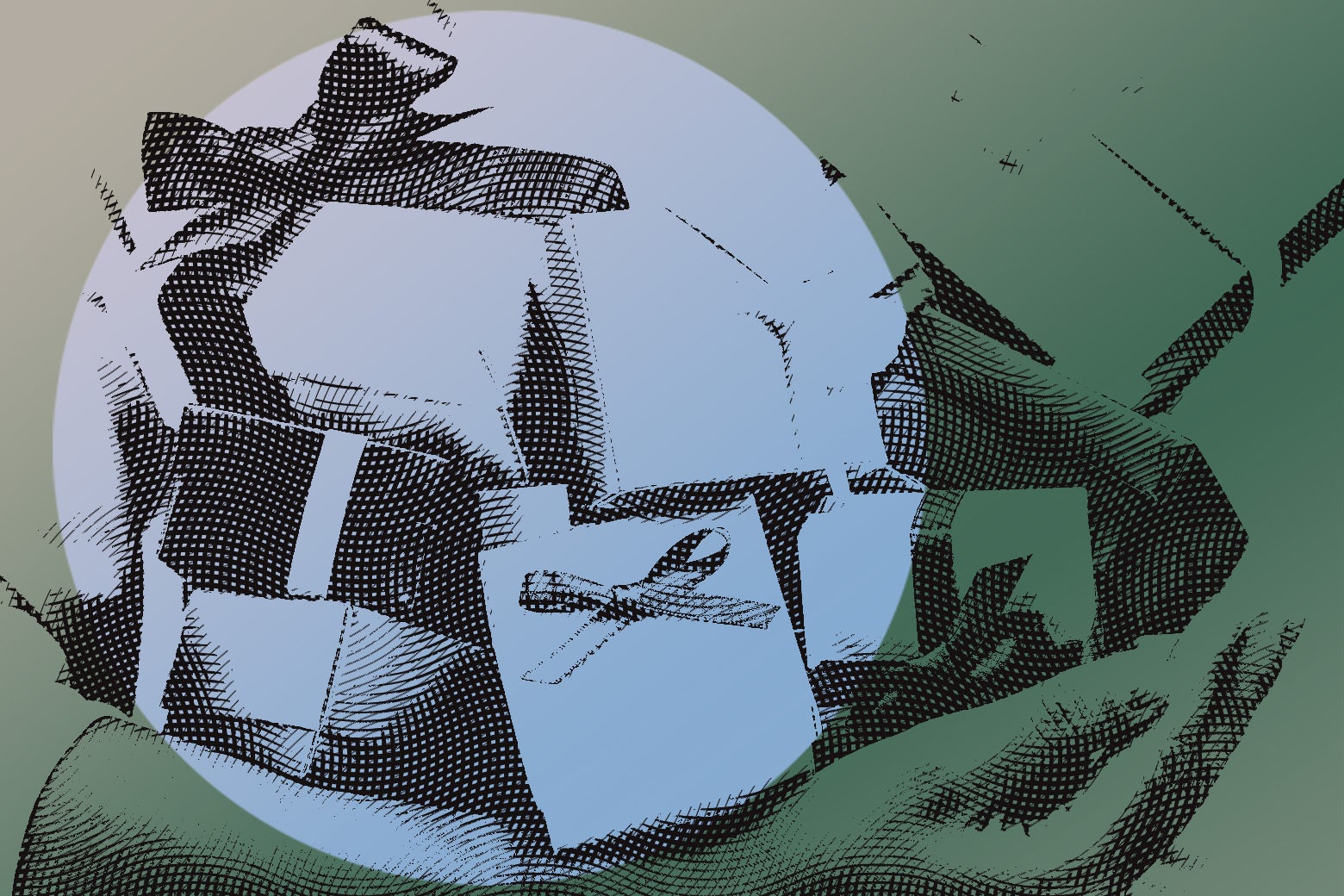 My Husband Budgeted $100 Total for All of His Christmas Gifts… What?

I spent his budget on one gift.

Excellent job gathering together everything in a cohesive way!

Y’all’s answers were so good and SO over my word limit. Thank you for the thoughtful responses.

I’m learning from the comments people care about gift-giving way more than me. ahhh now I am stressed

Regardless of whether YOU care about it, you still have good advice for someone who does.

Ehhh some people care but other people care about ones ability to not be flaky and listen through a whole conversation which I cannot do.

ones ability to not be flaky and listen through a whole conversation which I cannot do.

Oh no what if I can’t do either