George Floyd and the 5/30 Protests

[If anyone has suggestions on a better title, let me know. My first few ideas were all variation on “WTF” which isn’t really descriptive]

I thought I’d make a place that we can all be “together” in trying to process the recent events and share some places to donate to or other actionable things we can do.

My city is not a large city, and yet we had about 1,000 people show up on Saturday despite the pandemic. Some jack ass intentionally tried to drive through the crowd. He drove a few blocks away and circled back, but was then arrested. What the fuck.

We are have some rioting and looting. Sigh. But I wonder how much my reaction (aka, sigh) is a reflection of white middle-class suburban privilege…

Not much in the way of protests local to me, mostly people honking as they drive past the police station, but quite a bit an hour south judging by what I’ve seen online. Not in a good position to attend in person right now, but my 2020 unallocated donation money now has a home if I can sort out a couple appropriate charities today (covid ended up coming from another bucket for <reasons>).

I am heartened by the crowd at the White House who are apparently getting under Trump’s skin. I am worried about the white supremacists who appear to be using this as an opportunity to be even more vile. I also want to do more to support the protests but I can’t square taking Bobbin out when protesting and social distancing don’t go together (understandably). Saying that feels like a cop out though.

What I’m doing today today to do something is supporting the a conscious kid patreon and picking out some of their resources to buy for our family.

Look for the helpers:
Group of men surround to protect outnumbered police officer
Cops marching WITH the protestors in New Jersey and Flint Michigan
People cleaning up trash in Minneapolis MI and Jacksonville FL
Colin Kaepernick Offers To Pay For Lawyers for People Protesting in Minneapolis

Not sure this exactly belongs here, but it seems reasonably accurate: 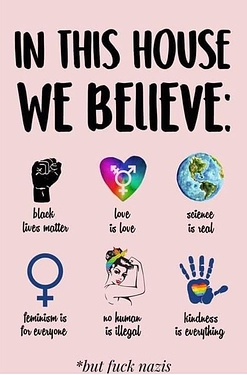 My city was literally on fire last night. I just woke up and am getting up the nerve to read the news to see what is still on fire.

The mayor (who is an African American woman) imposed a 9 p.m. curfew, announced it at a bit over 8:30 and said everyone on the street after 9 would be arrested - except, the CTA was completely shut down, they raised the bridges that span the river so no one could leave via the north, and they closed entrances to Lake Shore Drive (which, duh, runs along the lake and is a major way out of downtown) and the expressways (also major ways out of downtown).It felt very much like they were trying to pen in the protestors so they’d have an excuse to arrest them. I think that was the most terrifying part of this whole thing and I am unsure how to process it.

I don’t see how any of this ends. Though, I think that really all of us should be revolting in the streets for multiple reasons. And I feel like a huge asshole for not wanting to put my safety and my health at risk to go be there. I feel helpless and scared.

I decided last night to donate all of my Etsy sales to the various funds in MN. June is usually my top sales month outside of the holidays because of Pride so maybe I can get together a decent amount of money to help. I can’t think what else to do.

Sharing this document on anti-racism resources, in case others might find it helpful: https://docs.google.com/document/d/1BRlF2_zhNe86SGgHa6-VlBO-QgirITwCTugSfKie5Fs/mobilebasic?fbclid=IwAR12R70nvm5pf-CQQ6ySPHKjYAGLQRihnlCcE9dFnSJyDrHjloA-L3nH-XY

Still trying to process things over me, but alternating between trying to figure out ways to help and complete paralysis. Like I’m adding books to my list to read, but I haven’t posted to social media at all (I never post generally, just like others’ posts, so it’s a hard habit to break). Is my silence on social media incriminating? I don’t know.

I have had similar thoughts about social media. I see it this way: I have two brands and I felt it appropriate to address it in some way there because I have a (very very small platform) I don’t post much personally anyway so I haven’t posted there. At a personal level what is infinitely more important than what I post is what I do. So I’m focusing on educating myself and my family, doing the work myself to find resources on what I can do, and then walking the walk.

I can’t think what else to do.

I sympathize. What I’ve seen suggested is to donate to funds in your own city, educate yourself through reading on white supremacy/how to be anti-racist, and donate/be involved in orgs that work to make life better for POC in your city not just now during the crisis but every day. I know nothing feels like enough.

Just to get this out of the way…

With that non-eloquently said, the swankier parts of LA (Rodeo Drive and Beverly Hills and nearby) were hit, most places are fine. No idea if it was “legitimate rioting” or opportunistic BS. Its such a clusterfuck by now…

I don’t feel bad for not being out there; I’m not at all good at being outwardly angry or being around expressions of anger. I am looking for things I can do…right now looking at donating to legal aid organizations and the Floyd famiky, as well as writing/calling to every level of gov’t representation I have, from city up to Kamala Harris.

ETA for those who havent seen it, https://www.joincampaignzero.org/

I think that the cops marching with the protest (I only saw the flint video where they ask how they can help and are invited) shows a path forward.

I also read some disturbing things about white supremacists, police brutality and elections

I was happy to see this article’s headline getting it right:

I put this in the top ad bar, but this is a good comprehensive resource on places to donate + actions to take

I’m doing my best right now to reach out to my white friends and family and get them involved in conversations at the very least. It’s really hard to actively practice discerning between appropriate times to call in, call out, and disengage. Some conversations have been productive. I’ve looped some folks in to some SURJ webinars.

I just keep checking social media every morning to make sure that my friends in impacted cities are safe and not behind bars.

I had a australian friend who saw that and was genuinely confused that US schools have contracts with cops. That was an interesting perspective shift. I had to go through metal detectors every day at high school and had 2-4 full time on-duty officers at school. (and no backpacks or purses allowed after you arrived, must carry everything in your arms so you can’t hide weapons)

I would be more worried about the impact on violence at schools if any cop at any school that had a shooting was ever reported to be helpful. Given their response in places like Stoneman Douglass as well as their impact on the school to prison pipeline, good riddance.
I went to a very small rural (ETA: white) school with no violence issues though. The only time there were cops (county deputies) at school was to stop people from sneaking into the basketball games without paying, which in hindsight is an even weirder way to deploy cops in schools than metal detectors.
(Just checked with Mr Darling and he thinks the only reason even that happened was that the county sheriff was our gym teacher’s brother and he would have watched the game anyway).