This came up on neo’s journal:

What are your recommendations for good birding apps and other naturalist identification apps (identifying flowers/trees/whatever)? Free ones preferred because realistically I’m never gonna drop money on an app.

Also, for in person I can’t recommend a Sibley’s guide enough. I recommend putting tabs on your 25 most common birds in your region- should be able to find a list by a local uni

I definitely have paper guides! It’d be nice to have something that’s a little lighter to bring into the field, though. ^^;;

I use PictureThis for plant identification.

I’m so excited to find this topic. I’m a huge birder. Posting to follow!

So IMO there are two really good, complimentary apps (and resources).

The digital versions of both (and the apps) include audio recordings of songs and calls, and I think in some cases video.

I personally feel the drawings and specific call outs and different age/sex plumage diagrams are extremely useful from an identification standpoint, moreso than only photos (although they are complimentary), especially when just learning, and feel the cost is worth the obviously big effort of producing such a guide. When the Sibley Guide (and later the app) first came out there was nothing else like it, and it’s much better than some of the other paper guides out there (like the National Geographic field guide, which I also have). Some of the birds in it may have “old” names (although maybe in the latest edition they have been updated, my book is like 20 years old and, for example, the eastern towhee is called rufous-sided towhee, I think (I don’t have it here in TN with me)), whereas I assume the Cornell Ornith Lab site is completely current, being 100% digital (although I don’t know).

Juvenile great blue heron? Something else? I checked, and the birding sites say that a heron has been sighted there in the last couple of days. 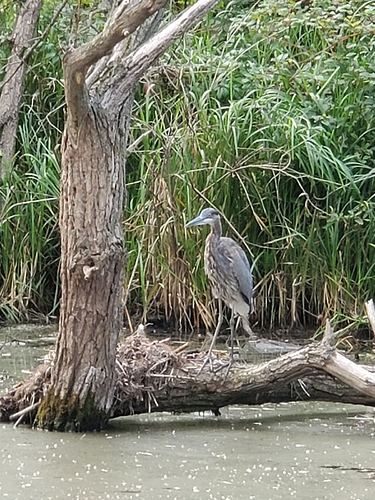 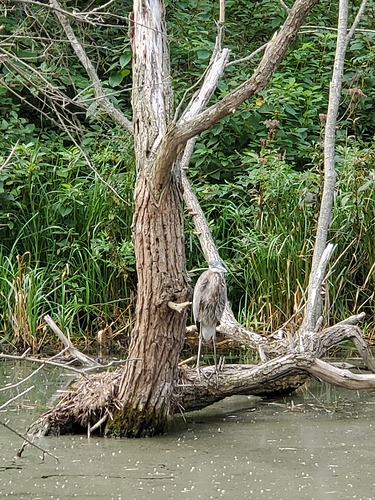 Looking quizzical about why a cyclist had bothered to stop 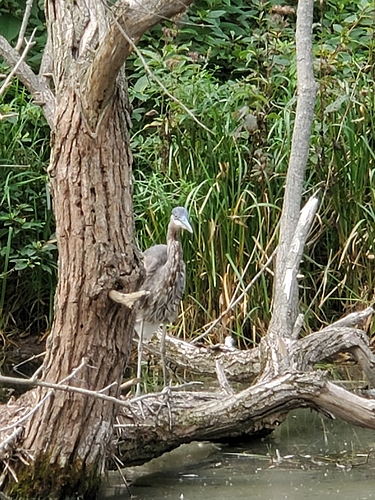 Yep, that looks very much like a great blue heron.

thanks - do you think it’s a juvenile, or have I just never been close enough to have them seem shaggy?

Is the season right? Do females also have the crest?

The grey is described as “unmistakable” so I’ll vote yes

I think shaggy is more because it’s feathers are wet. Source: I lived in a house that backed up to a steam for several years, herons we’re a common sight.

Oh and it looks like juvenile plumage is that whole first year. So either wet and crest is down so we can’t see it? Or juvenile. Don’t seem to be sexually dimorphic from what I’m seeing online. 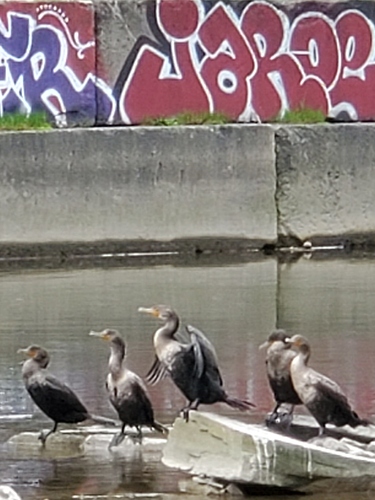 Another bird ID request. At first I thought cormorants, but they seem less skinny and much lighter colours.

These were on a toronto river which theoretically has a salmon run happening. Coexisting with mallards, Canada geese, gulls, giant egret.

These do look like cormorants to me, the beak shape, the way they are standing… It looks like Toronto probably only has one species typically (double crested). Juveniles (1st year) are lighter in color than adults, especially the chest, so that could be it…

thanks! looking up the juveniles in google images, I agree.