Shhhh…secret! Nicole from (dearly beloved, no longer up) The Billfold is coming back for another collab episode of Oh My Dollar! And our theme is…ramen. And no, not that fancy ramen you had at a Tokyo subway station.

No, we mean top ramen or {insert your regional variation of the stuff here}. That stuff you get in packets you can get for 10 for a dollar. Which thereby means you might very well have some financially-tangent memories related to them. 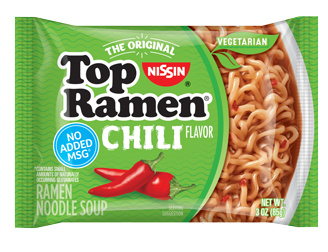 And…we want your reflections, your memories, your…anything about ramen.

If you have questions you want me to ask Nicole about what she’s been up to since she went fully freelance and shut down The Billfold, feel free to let me know! (She maintains a pretty rad blog for her personal money/freelance writing stuff over at https://www.nicoledieker.com/)

In college when we were decidedly not-sober late at night, we would make Shin Ramyun (Shin Ramyun Black if we could get it), 1 or 2 packets depending on how many of us there were. We’d boil the noodles, and then pour off most of the water, toss in the flavor packets, toss in an egg, and stir it over the heat until the egg was cooked. Then we’d add some dollops of sweet soy sauce, and then we’d pounce on it like a bunch of lions.

I also ate a lot of ramen in high school. The place where I worked didn’t have a fridge, but it did have a microwave, so I made plenty of cup ramen on my 3–9 shifts. It was a hot meal (wonderful) and so much cheaper than buying a meal out and bringing it back to the store – I did that once or twice, but when buying a meal is equivalent to two hours of pay, it’s not a great option.

I now really want cheap ramen and we don’t have any in the house.

In Japan they make ramen flavored like Pringles and Pringles flavored like ramen. You can buy both on eBay, and yes the shipping costs will be way more than the actual products. This was probably my husband’s favorite gift I ever got for him.

My folks filed for bankruptcy when I was about…ten years old?

We ate a lot of ramen for several months.

I don’t eat much of it now…I feel like Ramen and I have a complicated relationship! I never want to eat it but sometimes it’s just what I needed.

I am interested in trying some of the “elevate your ramen” tips I’ve found online, but have zero motivation to do so.

Backstory: I grew up in a meat-and-potatoes house. We rarely went out to eat (and our local restaurant choices were italian and steak). The most flavorful thing we ever ate at home was tacos. My HS boyfriend took me to a Chinese restaurant for my first time and I thought it was awful - because the taste was unlike anything I’d ever had.

Ramen: My first year of college, I lived in a dorm where we were only permitted to have a microwave and a hot pot (electric kettle). That year I learned about ramen. But, based on my one experience in HS, I didn’t like Asian food. So I would cook the noodles and eat them plain. I gave the flavor packets to dorm-mates.

(Side note: when suitemates would order Chinese, I put in 50 cents to get just a side of plain white rice and that was my dinner.)

I hadn’t thought about this in many years. My palate has come a long way since those days!

If you want a really harrowing culinary experience, try using the dry ramen bricks as bread for a peanut butter and jelly sandwich.

(Note: do not try. What was wrong with college me)

Not so much ramen but same same, as a poor uni student I ate a lot of plain spiral pasta (50c per 500g bag) with grated cheese. That’s a meal right?

as a poor uni student I ate a lot of plain spiral pasta (50c per 500g bag) with grated cheese. That’s a meal right?

Umm, literally what I still have for dinner on nights I can’t give an eff. Sometimes I add chopped veggies.

I never quite got the appeal of ramen but my wife still eats it pretty regularly and if I’m too sick to cook that’s 9/10 times what she makes the kids for dinner. She only likes what used to be called the “oriental flavor” Maruchan but now is called “soy sauce”. She makes it where you pour all the liquid off and then adds just enough seasoning so you don’t shrivel your gums from the saltiness.

But it definitely brings back memories of college, so many dorm mates who made ramen in their hot pots! My across the hall neighbor most of the time I was in college had some truly impressive chopstick skills for a non-Asian.

In college I preferred mine with minimal liquid. Still do, I just try to eat better

I never liked it this way but my siblings did! Mum liked it because it was a cheap way for the kids to feel like we were having “fancy” packet food.

My friend at uni who was Singapore-Chinese made us a huge pot with frozen peas and fried eggs.

I’m still sometimes guilty of making ramen with “peanut sauce” by adding a spoonful of crunchy peanut butter to one of the spicy flavors. Also I own a microwave cooker for those ramen bricks (it’s just a rectangular bowl with a marker for the water level…)

In college I was less sophisticated - “Oriental flavor” with most of the water poured off, cooked in a pot. Often one packet was all I ate in a day so it’s a wonder I can stand it now.

Note to the wise: if you have some hot dogs as cheap protein, it’s better to eat one and then eat your ramen than to cut one up into the ramen. Promise.

It’s not half bad. Better with a dash of lime juice, which I’ll do when I cook it at home. But the PB and ramen cups will keep in a drawer at work.

If you haven’t ever tried it, put a dab of red curry paste and a couple tablespoons of coconut milk in the beef or “oriental” flavor.

If anyone wants a ramen horror-story…where I grew up people made ramen by cooking the noodles, draining them except like 1/4 cup of broth, then adding the dry packet to that, and then…covering it in ranch dressing. I wish I were kidding.

I have no idea what it tasted like because I never tasted it. I’m a hot sauce only gal. Sometimes nooch.

My older brother and I got off the bus before my parents got home and weren’t allowed to use the microwave (much less the stove) when no one was home so he would eat the noodles uncooked. I tasted it but much preferred them cooked. I loved the blue packaged flavor but now I’m spoiled by delicious and well priced pho delivery.

Definitely reminds me of childhood.

As a teen I lived on instant ramen because my mum was a terrible cook and I didn’t even know how to cook an egg.

I bought instant ramen for my kids to try and they were grossed right out. They have been spoiled by the from-scratch ramen I’ve made for them every few weeks since they were babies.

I lived on top ramen at boarding school, so much so that I designed my senior yearbook page around a wrapper. Discovered the raw ramen snack on a hiking trip with that school and was shocked that I liked it.

SisterX’s BIL blew my mind at 4 AM by stirring eggs into our top ramen.