It’s scrollable and usable but clunky and inconvenient.

That’s been happening on my ipad for quite awhile. It doesn’t happen every time, but most times. I am able to scroll up and use it still, but a little inconvenient.

what is your browser?

I’m using the OMD app which I believe runs through Chrome.

ETA I think it used to take up half the screen so I could see some of the posts behind it? Or what neo has. I can’t remember at the moment lol.

On my end it is Safari.

However I just tried to make it happen and it didn’t Just the whole screen now, which is better than bigger than the screen. Not sure when it got fixed or if it is a random glitch? 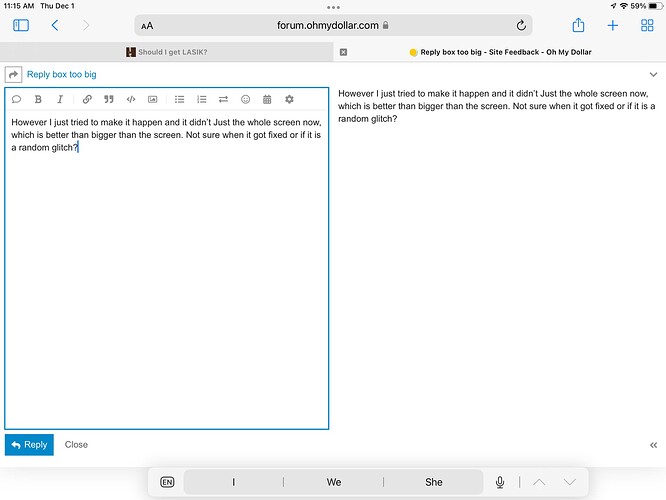 OMG is it going to start getting bigger and bigger???

Same here on a pixel in chrome

It’s normal if I minimize the keyboard but balloons if I actually start typing. Not sure this is helping just providing available observations.

Mine also became too big staring maybe a week ago. Same as Gqliver, i can shrink it by lowering the key board. But it’s annoying.

brings new meaning to the phrase “reply all”