Getting in the October Spirit

A few years back I went to visit my friend in LA and we went to universal for their Halloween horror fest. It was fun going through the mazes and watching people get terrorized be actors with chainsaws.

The best was going through a maze and the girl behind me kept grabbing me and apologizing because she was so scared.

A big amusement park near me opens for the evenings during October and has all of their traditional rides, plus extra Halloweeny things. I won’t be doing this year for obvious reasons, but it is a lot of fun! 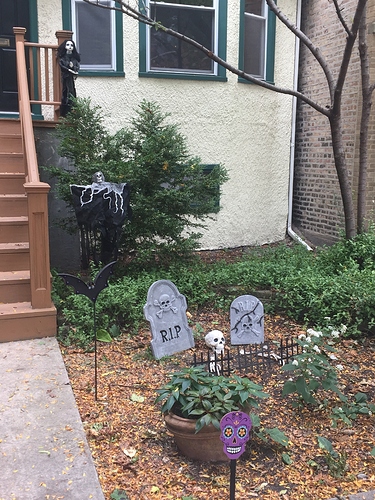 We’re planning a distanced outdoor get-together with bonfire. Still working on details. Expect to have it BYO food and camp chairs, we’ll supply the sharpened sticks for hot dogs/veggie dogs and marshmallow toasting. Inviting the hardier sorts who don’t mind going pee in the woods. We’ll need a rain date.

Usually it’s cool to cold, especially for night time trick or treating. But definitely not always!

I am reading spooky books: I read The Haunting of Hill House in September, and now I’m reading We Have Always Lived In the Castle and The Lying Game (by Ruth Ware—it’s allegedly scary, at least). My Halloween decorations are mostly breakable so they’re still in the boxes, but we have filled the house with real pumpkins! I’ve had a couple of pumpkin spice lattes and we have cider in the fridge. There are ginger snaps in the pantry and this weekend I made pumpkin muffins, as well as vanilla scones.

My birthday plans, including pumpkin picking with my family, has all been postponed but should be happening next week. And I’m working on plotting my NaNoWriMo novel!

My plans for October mostly involve cooking haha. Smitten Kitchen towering pumpkin bread is going to happen. So will something apple-y (maybe a crisp?), and if I get really into it, some cinnamon ice cream and apple cider donuts.

Definitely also planning some Halloween-y reading and movie watching. Wizard and I are watching the Jeremy Brett Sherlock Holmes right now, which always give me Fall Feelz™.

I’ve been keeping apple crisp more or less permanently in the fridge since apple season started here. So yum!

This is in my lineup too!

I’m also going to go to a cider mill and get a cider slushie and some donuts.

The cats get into the festivities too: 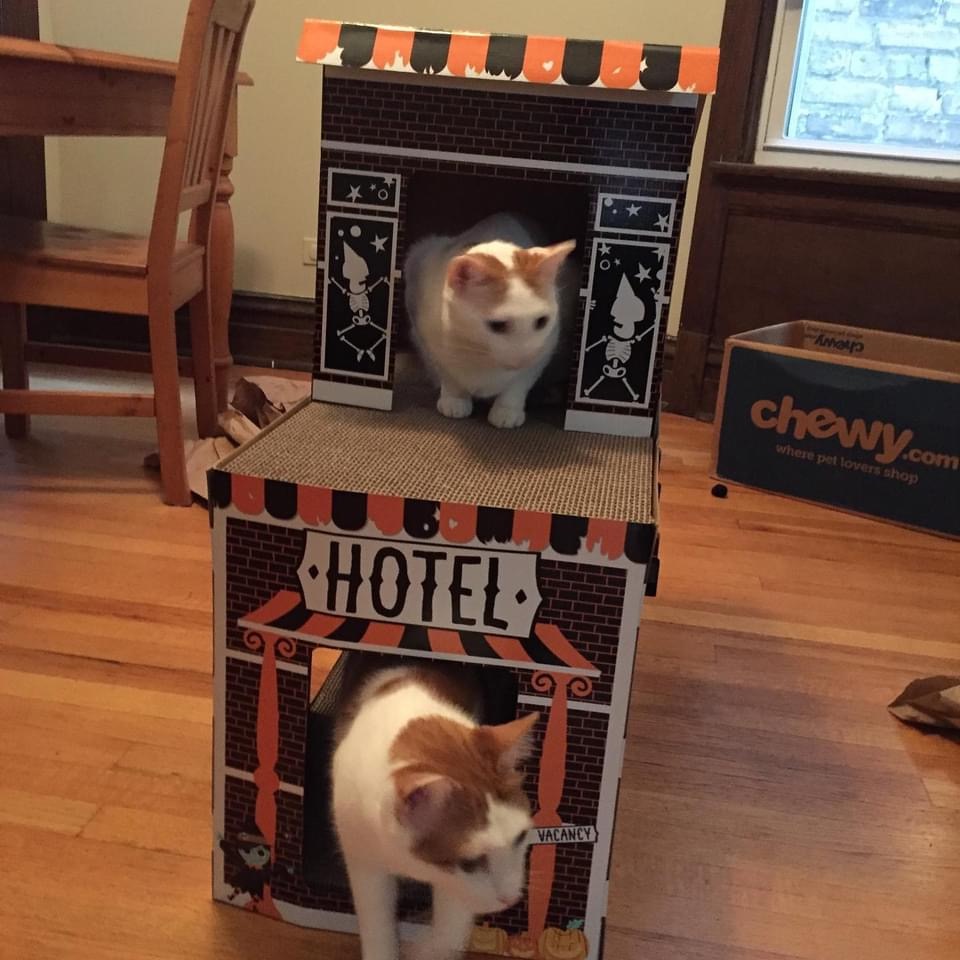 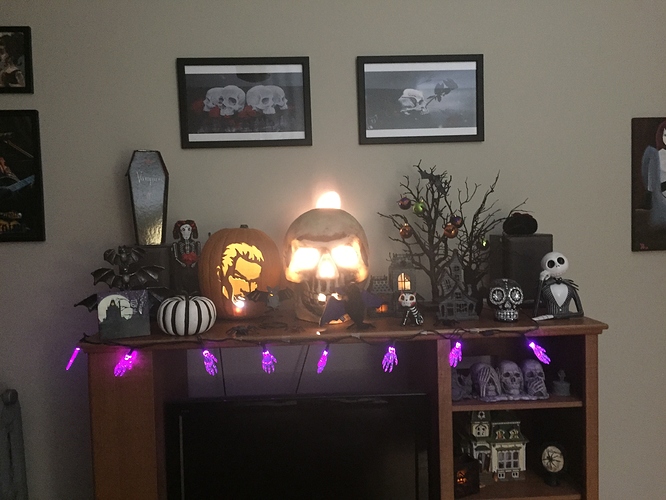 I love all of this so much

Ended up tweaking the bats to other spots because they were not very visible at all on the Magnolia tree, but overall I’m pleased with how this turned out. 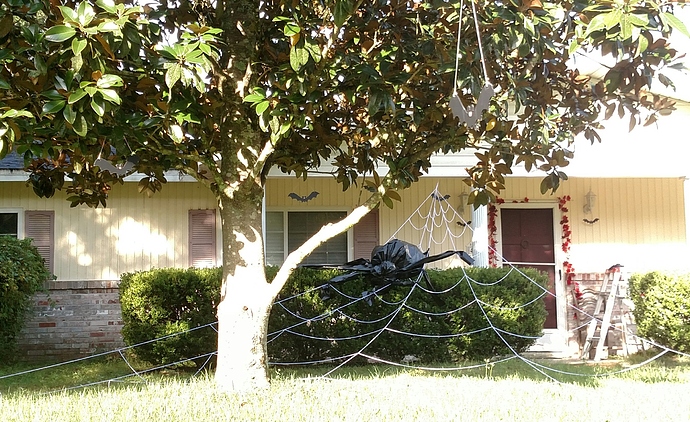 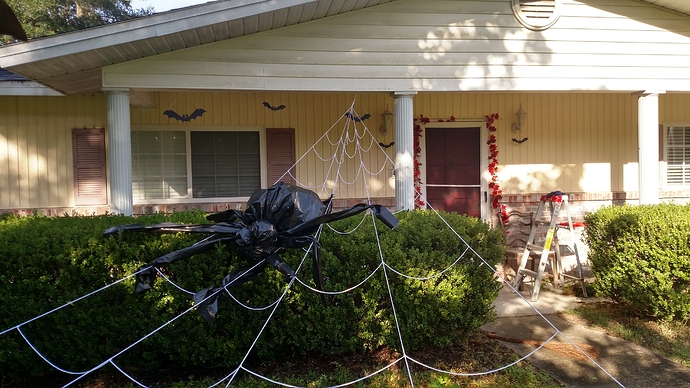 The web was the best bang for our buck, the bats seemed like a bit of a miss till I moved the smaller ones by the house where they’d be way more visible, then left some of the bigger ones on the tree down low so they can still flutter around. Note to self for next year, pick up some of those cheap drive way reflectors to use as spider eyes (although??? on how to attach them in 1000% humidity conditions)

Superglue would do it.

Apparently this year we are, for the first time in my life, buying a pumpkin to decorate and maybe carve, because Duckling has heard about Halloween at daycare and is super keen to get involved in every holiday he hears about. Is it cheating if I buy googly eyes to stick on it instead of carving a face?

No, not cheating. That’s just an excellent choice. You can also draw on it with permanent markers.

Carving pumpkins is messy. Not to mention can be hard on the hands, especially if you pick a complicated design.

Also carving them means they start decaying faster. Around here October often means that it’s cold enough to slow it down. Not sure what the weather is like for you but I imagine it’s getting warmer.

Kiddo gets a kids magazine that had painting a pumpkin as the suggested activity for the month so googly eyes are legit.

We carved two small pumpkins this weekend but after Kiddo went to bed I put them in the spare fridge cause we are definitely in the wrong climate to leave them out 24/7 for two weeks. This was Kiddo’s first pumpkin carving experience, there was definitely a few times he just had to sit there while the adults got the seeds and stringy bits out from inside (or he would “help” but was not actually helpful). And obviously he couldn’t do the cutting but he did draw the face on the pumpkin. 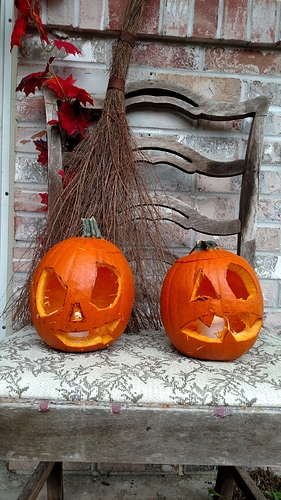 Yes weather is a pumpkin-limiting factor. If I intend to use mine for cooking, I carve it Halloween afternoon, and cook it down the morning of November 1.

Lovely! I’m hoping to talk husband into sneaking away to pick out pumpkins tomorrow during the day. I plan to paint some sort of Biden thing on it and then we will carve a few day pre Halloween. And chuck them in the trash Sunday night. 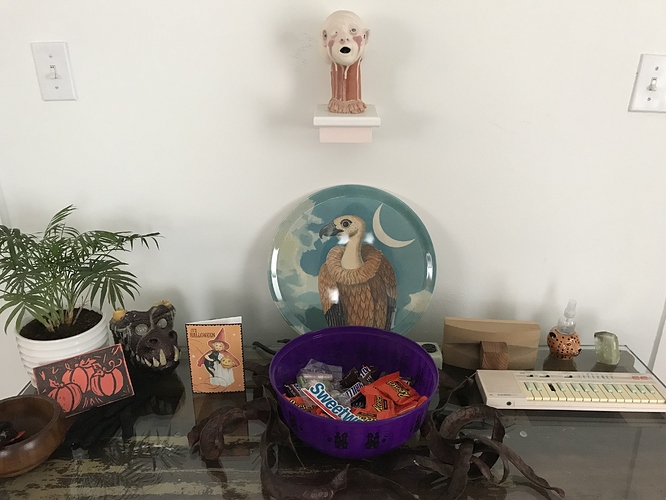 Many of those decorations are year-round.

We would paint pumpkins. My mom had some stencils that she would draw on pumpkins with a sharpie and then let me paint with cheap acrylic paint. It was far more entertaining for me as a kid since I could be the one painting, not just picking what the carving should look like and waiting for a grownup to do it. It also allowed for the decorated pumpkins to last longer since Oct could still be pretty warm.