Decluttering discussion thread: share your wins, ask for advice, inspire each other!

I found used, years ago, a revisible, wool short cape. I used the thing for years. One summer, the moths got it, badly… It wound up in my office, awaiting ragdom. I wanted to get the dimensions from it before I ripped it into wool rags.

Slowing down on the decluttering, both due to sickness and no low hanging fruit.

But I got rid of the light switch extenders we had when the kids were a bit shorter. They can reach all the switches now, plus we changed nearly all of them to buttons. 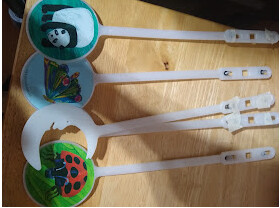 Things to deal with that I’ve taken home to home and not dealt with:

If this current gestation turns into a human, I’ll need to figure out what to do with some family heirloom type pieces that I won’t be able to fit anywhere without having a guest room.

Went through a tub of trinkets from childhood, almost all in the bin.

Posted quilting cottons, DVDs on buy nothing. Bin if no interest after a week.

Filled a box with 6kg of fabrics and clothing to be recycled. Wooh!

My wardrobe is functional again! And I have most of the pile in the dining room dealt with again.

These were snapped up immediately, as I expected. Thank goodness other people have different taste in fabric (the fabric came from my grandma who buys anything, I am merely a conduit as my mum helps grandma clear the house.)

Listed our old TV stand (we just swapped it for the Kallax and now it’s blocking our hall…) and an area rug we bought and promptly stored because we never ended up using our dining room as intended. Should sell both today. Hated wading back into the marketplace fray, but finally heard from a couple real people so

fingers crossed. And we’re delivering the tv stand so extra hoping it goes easily, can’t no show easily if I’m at your house lol! And both of the buyers I picked live super close so I’m hoping no one is super late or anything.

I absolutely do this lol. I am a stop on the BN expressway when my mom can’t handle directly parting with something. It’s community service

Miracle. Both buyers came through, no last second bartering or tardiness or anything.

This is such a good idea! Also going to think about this, probably for next year…

Another load went to the charity shop on Friday. Some books and a plate of my Step-father’s (no problems getting rid of those!). Also some more cardboard boxes were emptied and went into the skip.

Plus the two sets of tall shelves I bought on Ebay have enabled me to empty about 5 large boxes of books. And I’ve finally been able also to mix up my books with books from people I miss. I couldn’t do that before, it made me too sad. But something has clicked. Which is nice. Suddenly for whatever reason I can see that I know where they came from, AND they’re also all my books now. Am thinking this will make it far easier to sort them. I think it will.

tysm!! Reading back on this thread, I think everyone’s doing so, so well. Inspiring to see…

Having problems with this: feeling under siege. I do every winter, that’s not unusual. What’s different this year: the boxes which came from the storage still in the living room. The financial uncertainty related to DH retiring or maybe not, for months and now, it looks like he is. The books that are in the living room have mostly been gone through, mulitiple times. If I could move the remaining ones into the attic I would, but the attic is getting full.

DH has been working on his office this week. He tossed a bunch of software manuals and CDs for old versions of the software he supported. Today he made a shelf for the silhouette cameo we bought me. It’s one of two machines we bought me I’m afraid to use…

I should start making signage to go on the glass doors of my antique booth! Huh. Never occurred to me that I could use the silhouette to help sell the stuff at the booth.

I have books set aside for 5 different book dealers… all I have to do is deliver them. However, if I take them all at once, we get less $. The larger the lot, the less per volume. I know how this game works, I’ve been in it for decades, right?

All of them have material… and I’m waiting for $ for thåt before I send the next batch. So the timing isn’t up to me.

But I need to do something to get the living room clear, it’s kind of driving us both mad.

One more box gone. I went by one of the bookstores with a new box and they paid me for the last lot. Hurrah! Income and less stuff all at the same time.

I think we’ve finally figured out a decluttering method that my wife (who has ADHD) will participate in! one big task is easier for her than lots of little ones, so instead of trying to individually list items online, we’re putting items for donation in one big bin and when it’s full she has promised to call a man with a van to take it away.

That’s great! Finding something that works for everyone in a household is a win and can hopefully help with figuring out other tasks that can be improved.

We also have a designated spot for all donations, I don’t list things online much because it just seems like so much extra work. I do not have time in my life for that. I am shifting my efforts to take the pile of stuff to different local charities rather than just Goodwill though, especially if it’s clothes since my understanding is that Goodwill gets too many clothes.

I had been donating clothes to SA, after I read this, I decided that there are 2 good charities near here and I’ll donate what I have to them instead of the big guys.

From Goodwill to the Salvation Army: Evaluating the Ethics of some of...

This is why I basically give stuff peer to peer only now.
I’ve never understood why Goodwill can pay so little calling it “job training”, and Salvation Army talks out of both sides of it’s mouth on LGBTQ + issues. I don’t know of any local charities that have thrift shops here; just things like churches with donation closets. Our food bank is out of a church, and I give to them, but otherwise I try to avoid churches.

I think a few people on our buy nothing project are resellers, but also, they will take everything, so when I don’t list individually, I just message them and ask them if they want all the boxes. I know one guy, a refugee himself, distributes among the refugee community in the nearby city, based on his facebook page- but I think he also sells what he can. Whatever, it’s still gone, and now he has income.

Took the 2 peach juices my MiL sent us into work and left them on the Free table. Yay for fridge space back!

Thanks for sharing this!