Decluttering discussion thread: share your wins, ask for advice, inspire each other!

The annual maintenance is happening on the heat pump today. I was going to go and maybe buy a van, but the shop is closed. I’m really glad I called and made sure, because it’s a 2.5 hour drive to this place and I’d be MAD if I got all the way up there and it was closed…

Because of the minisplit maintenance, I sorted some books and tidied up the piles so that the fellow can get at the equipment. I’ll have a full bin to take to the dump Saturday, but I can’t get to the dump bin right now, the dining room table is pulled up in front of it to give the guy room.

Yeah- I think that is the idea of why he kept the boxes; but none of it is ‘vintage’, and now it’s just old. I don’t think anything would fetch much if it is sold.

I convinced him to get rid of the boxes; but set them out for him to decide and so far, they are still there… It’s in his office though, so whatever.

I have got to figure out my craftroom. I think I may need to go Dana White container method and really stick to it. If the fancy yarn doesn’t fit in the container, it goes on ebay. I don’t even knit anymore…

A while back, I realized I wasn’t using acrylic yarn any more, just cotton or wool and ruthlessly purged my yarn collection. Someone was delighted, I"m sure, but it cut the stash in 1/2!

I’ve purged a few times. Now I just have the “collectible” yarn left…

Donate them, with the unused fabric to a cause having a charity auction?

I have been ditching a bunch of prefold diapers that are torn and shredded and have been through many babies. Plus a shirt with a small fix needed that i won’t do

Please give me permission to get rid of this.
It is smaller than a sheet of paper; a 7-year WIP knit shawl. It has been taken off the needles, it isn’t on stitch holders, I don’t even know if I was using a pattern.

Reasons to get rid of it:

Reasons to keep it: 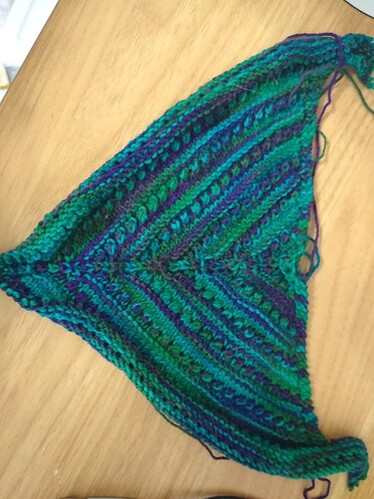 You should get rid of it <3

Holding onto things that no longer serve you is also expensive. It costs a lot in terms of attention and stress. And as for the other two reasons to keep it: it is ok to not produce. It’s ok to step away from things. It is actually incredibly productive to recognize when something is not adding to your life and dispense with it, and you can do it in a way that feels respectful to you. You could even wrap it in tissue paper before getting rid of it, and thank it for the moments that it was useful, but send it on its way.

You have permission to get rid of it. I had a piece that had bad connotations, and I did not repurpose the yarn, I just sent it on its way.

You also have permission to donate it (with what scraps you have of the rest of the yarn) and someone else who is a stranger can use it as a contrast in a beautiful new piece.

You also have permission to ask a knitter friend to make you something new with it to see if you want to wear it with happier memories.

Ok we’re moving in roughly 1.5 months and I want to get rid of as much as possible before that, so we don’t lug a bunch of stuff we don’t even want across town

I think given the timeline, the psychological part won’t be the most difficult part (although check in with me about Mr Darling’s hoarder tendencies in 2 weeks and see how I feel). It’s going to be actually getting the things out of the house in time. I’m back on Facebook just for the Buy Nothing group, and for Facebook marketplace, but: where do you get rid of your donatables?

I’ve given up on goodwill. They won’t take kids stuff, the line is always crazy long, etc. I recently learned our local humane society takes donations for their shop to sell, so I’m switching to that!

My mom has volunteered at a food pantry that also has clothing and housewares out for free. They take anything in good condition so I have donated a lot of things to them. Maybe you have something like that? I don’t even try to sell stuff anymore, it’s not worth the annoyance and I’d rather just gift things to people who can use it.

I’ve donated to Habitat for Humanity ReStores - check ahead for what they accept, but they’re usually good especially for getting rid of big/house stuff.

My work also has a buy/sell/donate Slack channel, and some offices (if you go in person) have a free table, but of course I don’t know if those apply to you.

Also may not apply, but one town I’ve lived in had a free donatables section in the recycling facility where people could take or leave stuff as wanted.

The little free libraries around here are usually pretty full, good for dropping off books one at a time but not a ton

The library book sale is next month though, maybe I can donate there!

The library book sale is next month though, maybe I can donate there!

I was just about to edit my post to include libraries for their book sales🤣 Good call!

This is a last resort option, but sometimes there are BN folk who will help redistribute stuff for people who are moving.

There’s also the craiglist free section, yard sales, and putting things out on the curb (for things that are harder to donate).

I’ve soured a bit on the Minimal Mom on youtube as it has become more of a personality channel, with lots of redecorating and RV trips, but she sent out an email today that really resonated.

“We don’t have time for all our stuff.”

I feel like by the time I get to a lot of “personalities” they’ve kind of run their course in a lot of ways haha. Like, it’s their striving that’s inspiring, so once they arrive… kinda loses some weight I guess?

I have just posted a baby jumping thing, 2 adult sized capes for halloween costumes and some promotional mugs to buy nothing. If they dont go in 2 weeks, they will go on the verge where they will get picked up.

Heck yes, immediate interest on all the items. Got to put up some clothing as well.