I’m issuing a challenge: Budgetober, which will run from October 1 - October 31.

The goal for budgetober is set and stick to your budget for the month of October. It’s also vaguely halloween themed. Also it has special forum badges and even a STICKER for people that complete the whole month.

Who This Challenge is For

What do you get out of participating?

If you’re in to participate (or on the fence and need encouragement), comment below with what you’re hoping to get out of Budgetober and your favorite halloween-themed creature or object.

Last Budgetober I did my food budget. This year is, as we all know, weird AF. I’m not doing a ton of shopping, even online, and don’t particularly feel like I need to revisit the food budget right now.

I think I’d like to use the month to look at my charitable spending. I have a couple automated charges that will go through this month as usual. There’s also an annual fundraiser we usually attend that has gone from in-person to online the first week of October, so I’ll make a budget for that as well.

I’ll also put some time aside to look at our total percentage of annual charitable giving, if we want to increase it, and to whom.

I absolutely love that is your challenge. <3

I am IN. I don’t do a budget AT ALL right now, and you know what? Maybe I should start instead of idly worrying about it in the back of my mind all the time.

I am IN for this. I just posted in my journal that I need to get my shit together and actually follow my budget for October.

I’ve been approved for additional furlough hours through November, which means I’ll get half days on Wednesdays and $30/week.

My goal is to be intentional with that $30/week and put it towards spending for me.

The last month or so I’ve been using it to cover up for additional spending I’ve done. So instead of having an easy out for overspending, I’ll be more careful with my budget, there will be real consequences (like moving money from vet or auto category to groceries) rather than just covering up with small additional income.

In “this place is all about spending according to your values”:

My goal this month is to spend at least $100 bucks on stuff that makes my home happier. This includes anything from bedside tables to organizing stuff to hooks for putting up art to plants for the garden. I always put this shit off because I rent and I hate buying new things, but we’ve been here a year, we’re probably going to be here at least until the pandemic is over (if not longer), and I want art on the walls and bedside tables that work for our space. I spend 20 hours a day here, it should be beautiful and make me happy to look around.

I am so excited to see this again! I didn’t do a great job with it last year but am looking for support as I will be starting a new job and making more money. I am nervous and want to make sure I allocate the money appropriately with the goal of being debt free in a few years.

Last Sept we dropped the budget because things weren’t clear with the shadowy one and what work was going to start pulling out of my paychecks automatically for rrsps.

And I never created a new one. So the primary thing is to figure out the budget and reset the automatic withdrawals & investments. For extra points, budget for the holidays.

eta: true extra points, do a deeper dive on the real number once work isn’t paying for things

I want in! But I don’t know what to do that could even generously be called a budget - we just don’t. We both have the mindset of the Great Depression survivors that raised us, so we really never have.

So, I need to figure out better how to / how much to adjust retirement contributions, but that’s not budgeting. We buy only fuel*, food**, occasional necessities***, and utilities for the house.

Someone help me brainstorm? I really want to play along, and I reeeeaaaallly want the forum badges. But everything I think of just seems arbitrary.

*for him to drive to campus to teach three days a week, and for occasional National Forest excursions I don’t actually want to curtail, and for grocery pickup

**groceries only; definitely don’t feel safe doing restaurant or takeout, and there are no delivery options

***pretty sure neccessary - things like a new charger for his laptop because the old one has been peed on by a cat, a new fuel line for the tractor we require to maintain access to the house

do you have these amounts tracked over time? could you spend time this month to figure out what your budget has been (looking at cash, credit card spend for the past x months) so you can decide if your spending is in line with what you want?

I mean, I kind of do already? Not constantly, but I last checked everything a month or two ago, and it looked right. But I could track and report again. I don’t think it’s budgeting, exactly, though as I don’t have a goal to set.

But tracking instead. I could bore you guys with every penny we spend weekly. And maybe I could “budget” on electricity if I make an effort to track down unused wall warts and the like.

Edit: and I’ll try to sort out the retirement bit as soon as I see what we actually make now (end of this month). I think I have a goal of averaging the same takehome this fall as I did last spring. Not sure if I want to include his income or hoard more accessible cash since he has income. I think exclude his; we can always change our minds later and apply his income to our IRAs if things look more stable by April.

I am in! Started a new job last week and first pay day is 30/9 so ideal time to update my budget

So excited for this! We are managing spending pretty closely to build up our targeted savings – Right now the big focus is Christmas and building a buffer in home maintenance.

Yes! This year I’m on maternity leave so much less income compared to last October. I need to redo the budget going forward.

I have things to budget! My goals:

It’s a three-paycheck month, so if I can stick to this I can throw a ridonk amount at debt. POWER PANDA MODE ACTIVATE

I’m so excited for budgetober! My first post on these forums was my budgetober goals last year, and November will mark a year that I’ve been not just budgeting but also mapping my total debts and assets, and I’m excited to look at that at the end of October to see how far I’ve managed to climb toward being out of debt in the past year!

Here’s a snapshot of my last year categories: 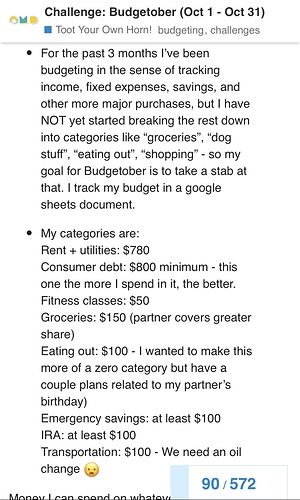 For this year, I already bought most of Sweaty’s birthday presents, so that shouldn’t be a big issue.

Here are the things I’m really attending to:

Groceries: $150
Impulse food/eating out: $10 — this category has crept up, so I want to leave room for one or two on the run snack emergencies and that’s it.
Alcohol: $20 (will probably need to bring beer to a SMALL outdoor birthday picnic)

“Other”: $75 — $12 already dedicated to a IPSY subscription, which is a silly indulgence but has been pretty fun. This category encompasses everything from shampoo to household items to books and houseplants, and part of my goal for the month is to actually also track where the money breaks down in this category. Also in recent months I have been setting this category to $25 and then WAY overspending it, so trying to be more realistic!

I want to pay off my last credit card bill this month (I still have two personal loans after that), which will be about $185. I may attack that in two payments or all at once using my beginning of the month pet sitting paycheck, haven’t decided yet.

One place my budget is way up in the air is around personal medical expenses, as I’m hoping to get an IUD. I have a telemedicine consult next week I think I have to pay $70 for, but I have no idea when I’ll be able to schedule the actual insertion after that. The device is covered, but there’s probably another specialist copay for the insertion appointment, if not a higher charge? I have an HSA and about $300 in it (putting money in each paycheck but building back after paying off a different medical bill), and I hope to still have $ in my HSA by the end of the month!

My goals for the month more broadly stated are to 1) track more than just the total amount spent in the “other” category for my budget, and 2) use this whole year of serious budgeting data to try to create a better sense for myself of when I can reasonably expect to get to non-negative net worth and, after that, actually get out of debt (I’ve used undebt.it, but my variable income has made the projections feel inaccurate).