Savings will start going down next month because I have been saving the amount that would be a car payment for a few years. Now that I have the car, they will probably want me to pay for it! lol That amount now will go into payments rather than savings. I will still hit my goals though, plus I will have a new car!

Some extra expenses this month without corresponding extra income, but that’s all accounted for with the sinking fund, which isn’t part of the savings numbers. But there was enough margin in the budget (and probably some residual stimulus) to accumulate beyond what I like to keep in checking that was sent to savings. So a better month than expected.

Did April even happen? I think I missed it

60% I got a big commission check this month.

54.8% I’m super pleased with this. I don’t make enough in normal weekly pay to save a whole lot, but I tend to save the majority of commission checks and tax refunds.

I’m not sure how it is August already, but here are July numbers.

Y’all, here’s the ABSOLUTELY chaotic sticker that I just sent to print that you received for this challenge 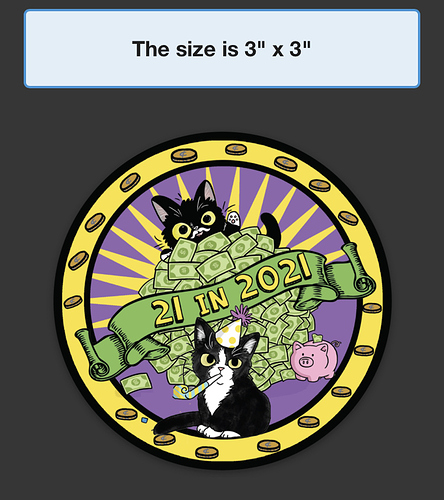 There’s some big Scrooge McDuck energy here and I am so here for it.

One kitty has so much money that it only feels ennui, and one has so much that it’s vibrating with energy/fury! 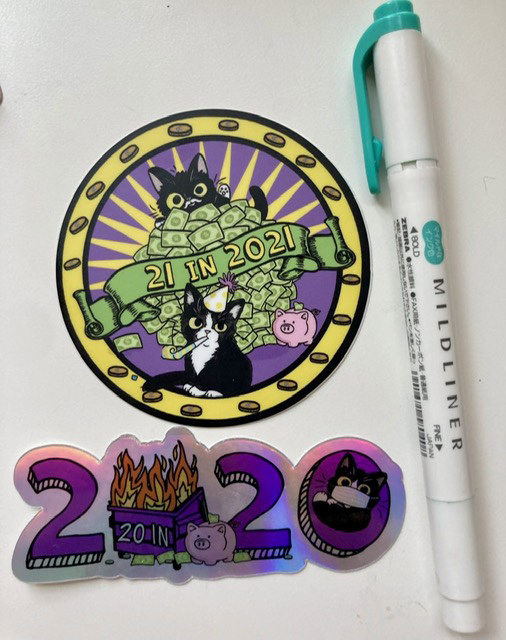 Stickers are here and I’ll be doing shipping out of some this weekend! If you’ve already hit the challenge and want your sticker, please submit this form:

This is a form for submitting your address to get your sweet sweet reward sticker! We will not use this for any nefarious purposes, just to ship you a sticker! STICKERS WILL SHIP OUT LAST SUNDAY OF THE MONTH

I never officially joined this challenge, but it is literally impossible for me to fail at saving 21% at this point unless I literally worked more than 40 hours a week by quite a significant amount (not going to happen) and didn’t save any of it at all. And it’s quite unlikely (though not 100% impossible?) that I reach 21k by the end of the year at this point just via cash flow.

Currently savings are at 28% of gross income to date, 27% of my originally estimated income for this year ($55k). I will probably end the year somewhere between $55-60k.

ETA: I think it might be worth it to add as well, when I started working again I didn’t actually intend (initially) to save anything. Like, at all. I intended to make enough to pay the bills. (Also, I didn’t start until a few weeks into January, and the first few weeks were a bit slow, work-wise.) But when I started making more than that my goal quickly flew out that window and my anxiety brain kicked in and said I must save all the money. There’s… probably a happy middle ground somewhere. She says, as she plots how to shove money into her after-tax investment account.

Omg omg omg y’all! With what I’ve saved this month so far, not even including this month’s 401k or IRA contributions, I’ve saved $21,463.60 this year not including company 410k match.

Ahhhhhhhhh! This is mind blowing. I just keep expecting that I will have no money left to save each month. Even though I know I don’t really buy very many things except snacks and the occasional video game, book, or skin care thing, I just expect it to all be gone.

I forgot to post here at the end of Nov:

Savings as of Nov 30 were at 29% of gross income to that date. I’ll have to wait until the first week in January to see the actual total for 2021.

(I am thinking about this now as I am trying to calculate available space/flexibility for next year and it is stressing me out.)

Reminder! Please fill in this form and you will have your glorious sticker mailed if you haven’t already.

Well, I stopped putting the monthly numbers here sometime around, IDK August or so (?), but just did the end of year numbers and I made it on both easy mode and hard mode!

On to the 22% challenge! Could be just feasible with the 2021 tax refund, but will see.