@calbal I came across a homemade tofu recipe today and thought “oh I need to share that with CalBal!” then just now realized i’d made that association because you already mentioned it

That was an excellent article because they gave so many options for people to do it right! Really supportive and helpful, thanks for sharing!

I literally just made some today.

It was… an experience. It took wayyyyyy longer than it should have. Maybe if I had a soy milk maker it would be doable on a regular basis. And also an actual mold, since mine is shaped like the bottom of a strawberry container. We’ll see how it tastes maybe tomorrow? It turned out a bit soft, despite pressing for longer than specified because 1) the weights (cans) fell off when I was out walking the dog and the entire thing tipped over, and 2) it might not have been enough weight anyway. Also I had to use the butter muslin I use for cheese. Also also I was only able to make maybe 2/3 of the recipe because that’s all the dried soybeans I had on hand. Also I used epsom salts to curdle, which seemed to work fine (and was recommended multiple places) and I wasn’t about to buy a special product on just this test. WE SHALL SEE…

absolutes and for me them not leading to sustained change.

I just wanted to come back around to this, not sure I addressed it. My DH is very resistant to absolutes and I usually go all out and then crash & burn. What we’ve found works for us is to do just one change, and if that’s too much we take that step and make it even smaller, and only focus on “yay I did it” instead of “I didn’t do it 7/10 times I had the opportunity to this month”. It’s taken a few varieties of reusable cup to find what works for us. We’re still breaking down our commute to smaller pieces to get the hang of public transport with a toddler. I tried a bunch of plastic wrap replacements until we worked out that just using plastic or glass tubs and doing a bit of extra washing is better for us.

I think we found a lower-plastic and eventually cheaper alternative to DH’s tiny yoghurt tubs! I’m going to interrogate my MIL about yoghurt making and find out if I can use a yoghurt maker for dairy and dairy free yoghurts. 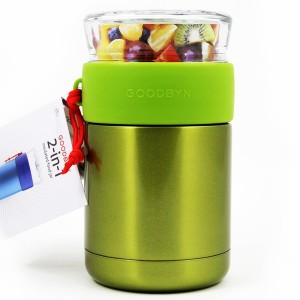 Two-in-one insulated food jar with a 470ml (16oz) stainless steel container plus a 235ml (8oz) glass screw in compartment. Uniquely designed to avoid landfill and be almost fully recycled at the end of its life, unlike most insulated jars! ...

You can use a yoghurt maker for both dairy and non dairy yoghurt!

Yogurt making is soooooo easy (especially if you, uh, have a maker like I do (basically it just keeps it at the right temperature, but you can do it just fine even without one, and if you have an Instant Pot (or whatever the equivalent is over there) it has a yogurt setting as well, I believe.) Saves a TON of money and plastic waste. Yogurt was the very first thing I started making for myself. Dairy is super easy, I am led to believe non-dairy is pretty easy as well.

Pro tip: I use some of mine to freeze in ice cube form to make starters to keep in the freezer. I do this when it is fresh (and potentially uncontaminated by whatever from being used). I do 12 at a time and when they are frozen I keep them in a Ziplock in the freezer. I re-do this process when I get down to only 1 or 2 in the bag. Eventually (supposedly) you will need to refresh your mother (just use grocery store yogurt or you can buy specific cultures, mine are Balkan right now I think?) but you can go a loooong time this way without having to refresh. Like, a year, maybe more.

Oooh. That sounds good. I don’t have energy to manage adding it now, but I will definitely be adding it to my long term list.

I took a “before” picture of my pantry, and I’ll be taking ones of the fridge and freezers too. I don’t think a month will be long enough to see a change, but it might! I’ve already swapped us from our bin being a plastic bag hanging off the pantry door, to a small bin inside the pantry to encourage us to recycle instead - and it’s working! It’s mostly working because we are now using our composter and worm farm to remove the stinky, drippy, awkward stuff before it goes in these bins. 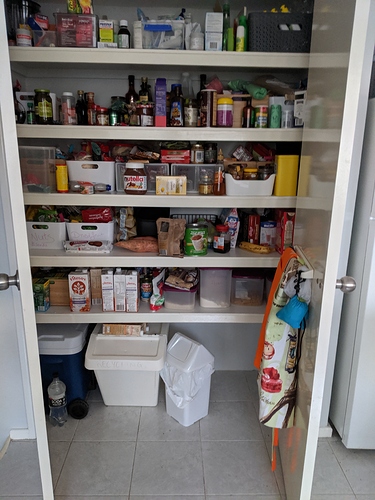 I’m jealous of the size of your pantry…

(PS autocorrect tried to make this “I’m jealous of the size of your panties” which I find hilarious.)

The “shell” effect in Magic Shell is due to the presence of coconut oil and sunflower oil both of which contain high amounts of saturated fat, and sugar, which produces a chocolate mixture which is solid at higher temperatures than would otherwise be the case with normal ice cream topping.

Magic Shell is a dessert product produced by Smucker’s in the US, originally created as Ice Magic by Cottees in Australia, and sold in the UK as Bird's Ice Magic. It is a syrup that quickly hardens into a crispy shell when poured onto a cold surface, which is the origin of the product's name. The syrup is primarily designed for use on ice cream. It comes in several flavours, including chocolate, caramel, chocolate fudge, cupcake, cherry, and smores in addition to two unique flavours—One with c In...

I always thought it was just heaps of chemicals…but that seems less toxic.

Me too! Also, that is hilarious.

Me too! This is yet another reason for me to get around to buying coconut oil - copious quantities of homemade ice magic!

jealous of the size of your pantry…

(PS autocorrect tried to make this “I’m jealous of the size of your panties” which I find hilarious.)

Thanks! It is a deliciously huge pantry. I’m ripping the innards apart sometime in the next year as the shelving is actually really awkwardly spaced, it will be the most amazing pantry in the world then.

And ice magic from the shops contains palm oil :shakes fist: so homemade with coconut oil would be so much better!

I know! PFJ is a big excuse to try a bunch of stuff I’ve been putting off.

Is there a recipe? I know I’ve made homemade hot fudge sauce before (because nearly all commercial ones contain corn syrup). 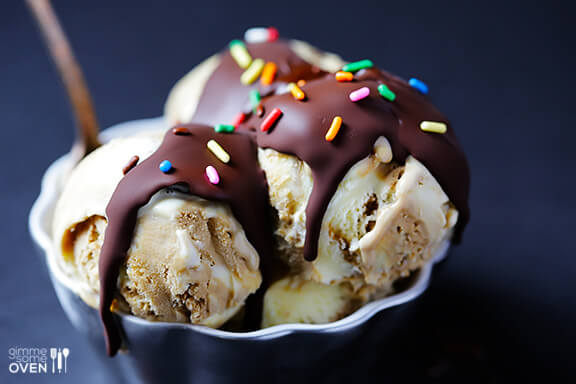 All you need are 2 ingredients to make and enjoy delicious homemade magic shell.

I am committed to doing 1 (where possible, some of our work safety equipment comes in single use packaging and I cant do anything about that)
I will try to do more though

I give myself a pass on work related stuff, like i try to reduce use of single use plastic at work as much as possible but safety stuff (and necessary medical stuff outside of work) gets a pass. You would end up using a lot more single use plastic if something went weriously wrong as a result of trying to avoid that plastic in the first place, if that makes sense?