Are You a Human? You Should Watch K-Dramas With Me

BUT HEY IF YOU EVER WANNA PRACTICE ARABIC. Also, unrelated to k drama, but I recently posted about a new series called Paranormal that is all in Arabic and based on the works of one of the best sci fi writers in the Arab world. Might be cool for language exposure!

Oops meant to reply to @anomalily so tagging for viz

BUT HEY IF YOU EVER WANNA PRACTICE ARABIC

I am not really at a speaking level right now unless you just want to like…have me say HOUSE, CAT, CHILD, WIFE, NEIGHBOR, DAKAR, JORDAN, and GOD WILLING at you. That is my full vocab.

I desperately need a physical book that shows me how to write. I can sound out and recognize all the letters but I can’t write shit, everything I write looks like a 2 years old. If the letters are spoken, I can figure out the word from looking at the written language, but it takes me like 30 seconds to decode one word.

I hear Jordanians have some of the best Arabic! Mine most closely resembles the Gulf with some borrowing from Egypt.

My writing in Arabic is fine, but my reading is atrocious. I read SO SLOWLY.

I decided since we derailed so hard, we needed a thread:

We already derailed the K-drama thread discussing language learning, so I figured it was good in another thread. Here we will discuss cheap, free, and other language acquisition/retention fantasies here. This top post will be modified to included free or cheap language learning resources Resources Most Common: https://www.duolingo.com/learn Learn Language with Netflix: https://chrome.google.com/webstore/detail/language-learning-with-ne/hoombieeljmmljlkjmnheibnpciblicm?hl=en

Just finished Rookie Historian, it was my partners first korean show. We both enjoyed it. Really cute characters and has a fun story that is easy to follow. Very happy with the ending.

@Meowkins
Have you watched Mr. Sunshine yet?

Very happy with the ending.

Have you watched Mr. Sunshine yet?

I haven’t yet! Do you recommend it? I think I saw the previews but didn’t know what to make of it.

Best K-Drama I have watched so far.
Historical dramas are my favorite
The show is in English, Korean and Japanese.

It follows multiple characters and they are all fully developed and have great character arcs. It’s also one of those stories where there is a gray area between who is in the right and who is in the wrong.

The first episode is difficult to follow because it is a lot of flashbacks, involves a lot of characters and jumps around in time. It’s definitely not a light drama. In Rookie Historian you never worry to much that there will be character deaths. This show is not like that but so so good.

I KNOW! They are just living their best life.

I’m finishing up Tunnel and The Good Detective, but afterwards I’ll give it a shot!!

Are these shows on Netflix? I feel like k-drama is something I’ve heard enough about to know I might like it. At least, the romances and slice of life style ones, none of the other categories are of interest.

Yes, these are on Netflix!

omg lust over this adorable coat with me

another shot of this gorgeous attire i will never own 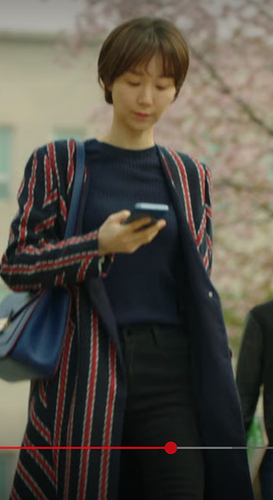 I like how structured the shoulders are. I think I see shoulder pads. :))